The Battle of Prestonpans Archaeology Project is the first investigation to focus solely on the archaeology of this important battle. The project is being carried out by the Centre on behalf of the Battle of Prestonpans, 1745 Heritage Trust as part of a wider project to further enhance the presentation of the battlefield with the aim of developing it into a world class heritage site and accompanying interpretive centre. This project is also actively engaged with the local community which includes the involvement of volunteers in field work and a series of artefact workshops in the local secondary schools of Preston Lodge and Ross High, Tranent. 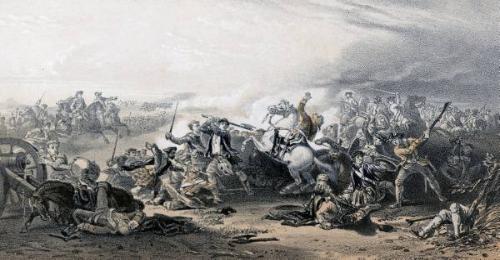 The Battle of Prestonpans is situated on the coastal flat lands of the Firth of Forth just east of Edinburgh. The battle, fought on the 21st September 1745, was the first action of the Jacobite ’45 rebellion and was a dramatic Jacobite victory. Prince Charles Edward Stuart (Bonnie Prince Charlie) was present at the battle, leading his army of plaid clad Highlanders against the redcoats of General John Cope.

The battle was fought in the early morning of the 21st and it was only a matter of minutes before the government army was routed. Cope’s army was composed largely of raw recruits who had not yet seen battle with many fleeing after the first engagement with the Jacobites, terrified by the ferocity of the Highland charge. The Government soldiers were pursued by the Jacobites for over a kilometre until many were trapped and cut down against the walls of Preston House and Bankton House. Some managed to find there way through the narrow defile running between the two parks or through breeches in the walls. Hundreds were killed in the aftermath and many were taken prisoner.

Since 1745 the battlefield has undergone severe pressure from a number of factors including communications, housing development, industry and large utility complexes such as Cockenzie power station. At this point it is interesting to note that the battle itself was fought in an early industrial landscape with the Jacobites crossing the waggonway constructed to take coal from Tranent to the coast.

The survival and extent of the battlefield in the present landscape is unknown, however there are areas of farmland which appear not yet to have been touched by development. It is in these areas, enhanced through detailed historical research to locate areas of high potential, where the archaeological investigation has focused. A number of techniques have already been used including geophysics, topographic survey and intensive metal detector surveys to locate and map areas of battle related artefacts such as musket balls, cannonballs, canister shot, grapeshot, buttons and buckles etc. There are plans now to do a small scale excavation on some interesting features relating to Tranent Church and Preston House which were identified in the geophysical survey. 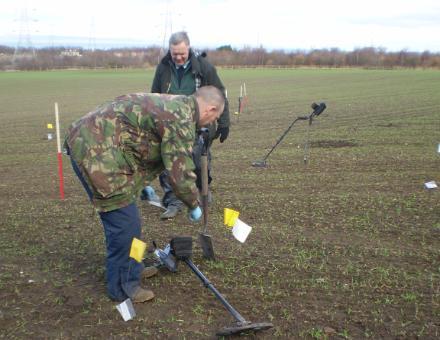 So far there has been a very successful three day metal detecting survey covering areas of farmland towards the periphery of the battlefield which includes Bankton House, Tranent Church and a small patch of land beside the community centre. All three areas played their part in the conflict, either in the days running up to the battle or in the final rout where hundreds of redcoat soldiers were cut down by Jacobites against the walls of Preston House and Bankton House. These areas were investigated with the generous assistance of two local metal detecting clubs SARG and SDC. The results of the survey were interesting with artefacts ranging in date from the 16th -20th centuries providing an insight into past lives around Prestonpans. There was however very little material which could be interpreted as skirmish activity or debris from a fleeing army, but this does not mean the survey was unsuccessful and could indicate the level of preservation in these more outlying areas of the battlefield.
But even in areas of the battlefield which have been covered by housing development there still is archaeological potential. Throughout the project artefacts such as musket balls, grapeshot and buttons dating to the mid 18th century have been found in gardens close the core area of the battlefield. The next stage would therefore be to test this potential by carrying out a garden investigation. If you would like to know more about the garden survey or would like to take part please click here to find out more.

A major element of this project has been the involvement of the local community and will continue to be so in the coming months. Volunteers have already been actively involved in a weekend of field work and assisting with more general enquiries regarding folklore and artefacts recovered by locals in the past. The success of the garden survey will very much depend on the assistance of the local community, especially those who are willing to have their gardens investigated. Thanks must be given to many members of the community who have taken time to rally support, particularly Julie Aitken who has done a great job in encouraging her neighbours to take part. 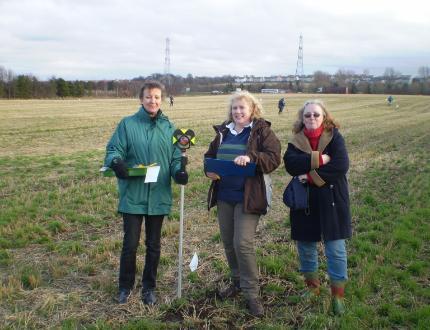 By far the most successful element of the community project has been the involvement of the local secondary schools Preston Lodge High School and Ross High in Tranent. Schools are the core of the community and it is vitally important to get young people involved and aware of the historical environment around them, especially as Preston Lodge High School is built on the site of the battlefield. The workshops were primarily designed for younger students from S1 – S3 and for those who require learning support. The workshops were artefact based and involved them analysing an object found on an 18th century battlefield using a specially designed worksheet. Pupils would describe and draw their artefacts and record it by measuring, weighing and photographing it. After the workshops pupils had a good understanding of archaeology in general, but more specifically the archaeology of their local battlefield.

Over the last six months it has been estimated that over two hundred pupils in Prestonpans and Tranent have had the opportunity to learn about the archaeology of the battlefield and have experienced close contact with battlefield material which may lie under their feet. The workshops have been very beneficial and have evidently sparked interest in their local archaeological and historical environment.
An article relating to these workshops appeared in an edition of the Times Educational Supplement Scotland (TESS) and can be found on the Media page, or by clicking here.

The project is still very much ongoing and we are expecting the results to be good in the core area of the battlefield, which will be commencing in the next few months and with the small scale excavations at Tranent Church and the Community Centre.
Assistance from the local community is vital for the success of the project and it isn’t too late to help out in the garden survey or by giving us any information you may know about any artefacts found in the local area. 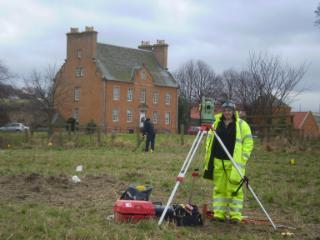 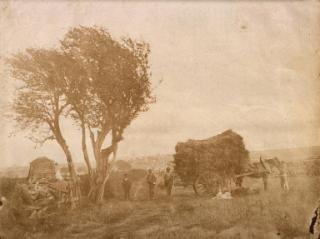