Annmarie Ford, Glasgow schoolteacher, and American Studies MLitt student at Glasgow 2010-12
'The MLitt in American Studies has been an immensely fulfilling experience, not only from a personal point of view but also in terms of my professional development... the broad range of areas covered in the core courses create a wonderful opportunity to explore many different aspects of American history and culture - from the frontier to film. The optional courses are also varied and interesting, yet allow students to narrow their focus in preparation for the final dissertation.

The MLitt has been beneficial to my career, not least through the new found confidence I have in teaching my own pupils about American Literature, but also though the support I received in applying for, and receiving, a fellowship at Monticello, Virginia to develop material for my school. This is something that without the MLitt I would not have considered.

The staff are extremely helpful and supportive, continually encouraging students to share ideas and explore whatever areas of American Studies they are drawn to. The result is a truly wonderful course that is full of enjoyment as well as education.'

It was a thoroughly exciting, enjoyable and rewarding year

In addition to vastly expanding my knowledge and critical skills in relation to American culture, the course inspired me to continue my studies and complete a Ph.D. I am now a lecturer in a school of American Studies and so this degree has been invaluable in shaping my career.'

Dr. Brad Jones, Professor of History at California State University, Fresno, and PhD student at Glasgow, 2003-2006.
‌'I am always amused by the confused look I get when I tell someone that I am an American who went to Scotland to study American history. Inevitably they ask why, and my answer is simple.  I had the opportunity to work with widely respected historians in the field. I was also able to draw upon the expertise of Americanists working at universities and archives elsewhere in Britain and America, thanks, in large part, to the university’s and the Hook Centre’s distinguished reputation. 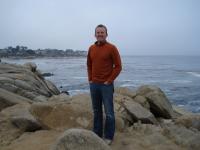 I also benefited enormously from studying American history from outside of the United States. We live in an increasingly global society, yet Americans, and to some degree even academics trained at American universities, continue to embrace a rather parochial view of their nation’s founding. Studying in Glasgow allowed me the physical and intellectual distance to see America’s founding in broader geographic and ideological terms. Such a perspective, I believe, would have been difficult to imagine had I attended an American university.
I am also proof that it is possible to study American history abroad and find work in the United Sates afterwards, even in an increasingly competitive job market. In fact, I attained my current position as an Assistant Professor of History at California State University, Fresno largely because of the faculty’s interest in my broader Atlantic perspective of American history. For this, I am indebted to Glasgow University and the Hook Centre for American Studies.'

Dr. David Doolin, American Studies MLitt student at Glasgow, 2001-2002.
'As I always had a strong desire to pursue a graduate degree, and as my personal experiences then seeped into my desires and ideas for academic study, the master’s in American Studies at Glasgow seemed to me to be a perfect fit... On a personal level, Glasgow of course was closer to my home and family, just across the water in Dublin. Moreover, the programme offered me a chance to pursue my passion for history, literature, and film alongside a growing fascination to understand America in the world, and begin to turn that into an academic career...It was the master’s degree at Glasgow that gave me an avenue to turn my interests into a serious academic pursuit. The American Studies programme opened my eyes and gave me the interdisciplinary tools to dissect, analyze, and comment on several fascinating insights regarding American culture, identity, and history framed in an international context. It opened the door for me to turn my interests onto a career path. 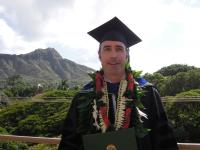 It was during my time on the programme that I matured and grew in confidence and foresaw the chance at going further with my studies. As I have stated in my PhD dissertation acknowledgements, without the academic challenge, the guidance, and the encouragement I gained from the master’s degree in American Studies at Glasgow, I would never have found the confidence to pursue my doctorate in the United States. Subsequently with the continued advice and encouragement from Prof. Simon Newman, Prof. Nick Selby, and Prof. Marina Moskowitz I would not have had the wherewithal to apply and be accepted into the American Studies PhD programme at the University of Hawai`i, Mānoa.

Having had completed the Masters in Glasgow before entering UH, gave me the advantage of a reduced course load (12 instead of 15), and the offer of graduate student waivers for the first two semesters of my doctorate journey. This subsequently allowed me the time to teach and then earn a graduate assistant’s position for the remainder of my course work, until the completion of my PhD. I am happy to say that I have finally reached my goal and achieved my doctorate, which was both academically and personally an amazing, unparalleled journey. Without doubt, having taken the first steps with the master’s degree in American Studies at the University of Glasgow was the foundation that finds me writing to you from the beautiful shores of Hawai`i in the week of my graduation, with the title of Dr. David Doolin, PhD, American Studies.'

I found the course very enjoyable; its interdisciplinary focus allowed me to continue to study both English and History

I found the course very enjoyable; its interdisciplinary focus allowed me to continue to study both English and History, and the modules enriched my understanding of key themes within U.S. history and culture. The dissertation element of the course also enabled me to enhance further my research and writing skills, as well as my knowledge of a particular subject-area (namely, the culture of the Southern States during the 1930s). The course served as a very useful preparation for further study, and members of staff provided me with helpful advice regarding the North American doctoral application progress; after the MPhil I proceeded to the University of Toronto, where I gained my PhD in History.'

Sandy Campbell, American Studies MLitt student at Glasgow, 2010-2011.
‘In a sense this is what academia should consist of, people using their individual strengths to come together and find solutions to collective problems. Seminars like this are also hugely important to American Studies because it covers an issue that impacts not only America, economically and environmentally, but also the world. Essentially, a discipline that can unite figures from such varied backgrounds and bring them together to discuss solutions probably represents one of the best hopes of reaching a consensus in the foreseeable future.

Indeed the interdisciplinary nature of American Studies gave the seminar a range of opinions that it would probably be difficult to hear in any other context. For instance, an economic or political debate on the issue would be quite a different prospect and would be distinctly poorer for not having the varied range of participants.’

Journal entry on the Annual Gordon Lecture in American Studies in 2011 (a roundtable on the American environment, with Professors Harvey Bryan, Gary Libecap and Ian Tyrrell).

Dr Mark McLay, American Studies MLitt student at Glasgow, 2009-2010, and currently lecturer at the University of Glasgow
‘I had never heard of Bruce Molsky before the announcement of the Gordon Lecture, but I was intrigued by the fact he had been nominated for two Grammy’s and that he had played Celtic Connections, an event some of my favourite bands have played before.  It was also to be the first time I had seen a live performance involving the banjo – surely a source of excitement for any student studying the United States.

Molsky once again proved to me the power of music in conveying culture.  As trite as it may sound, it was easy for me to believe I had been transported to rural south of the United States due to the sheer emotion that went into many of the songs, particularly the slow number which involved Molsky loosening his banjo strings.  A search of YouTube has also reminded me of the sing along song, Charmin’ Betsy, where the lyrics play just as important a part as the banjo in transmitting to the listener a sense of the culture the song was born out of.  It did not matter that the songs were covers, or that Molsky himself was not from the area of where the songs originate...My recent focus on music during the Vietnam War and American Counterculture modules, has only served to highlight the importance of the medium to the lives of ordinary Americans and also to people attempting to understand any society.

Just as Molsky’s performance took me to the Appalachians, the same could be said of the late 1960s and Buffalo Springfield’s For What It’s Worth or Credence Clearwater Revival’s Fortunate Son.  This is something I believe to be unique to music.  What other medium can so quickly communicate the region or era it originates from?’

Journal entry on the Annual Gordon Lecture in American Studies in 2010 (a lecture and musical performance by American musician Bruce Molsky).