Researchers have found that plastic debris is incorporated in up to 80% of seabird nests.

For the first time, it has now been identified where that plastic might come from - at least for some of the species studied.

Surveys carried out in 2018 on an uninhabited island off the west coast of Scotland found that more than a quarter of all nests contained plastic, while the presence of plastic debris in nests of European shags (Phalacrocorax aristotelis) was as high as 80%. 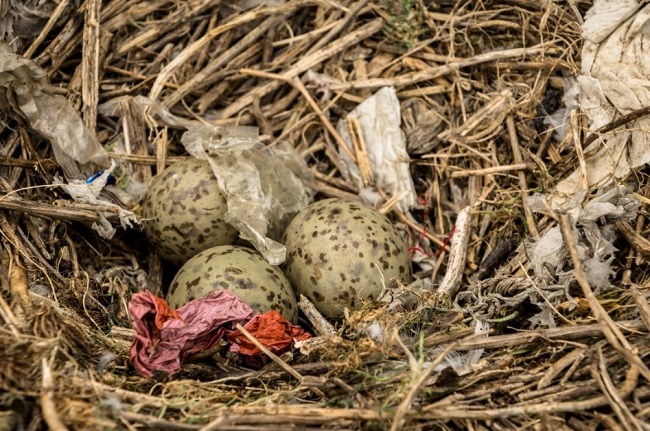 But in other species that build new nests every year, like gulls, only around a third of the nests contained plastic debris. The large difference between species in the proportion of nests with plastic is probably due to their different nest-building behaviours; shags reuse their nests year after year so plastic builds up over time.

The difference between species may also be explained by the way that plastic debris ends up in their nests. Plastic in nests has been identified as being mostly from consumer waste thrown away in built-up areas.

“They end up in seabird nests, not because seabirds actively pick them up in built-up areas and carry them to their nest, but because are brought there passively by marine currents.” says Dr Ruedi Nager, a seabird ecologist and senior lecturer at the University of Glasgow.

“As herring gulls often forage in landfills, we wanted to see if they were swallowing plastic whilst eating and then bringing it back to the nest,” said Ms Thompson. 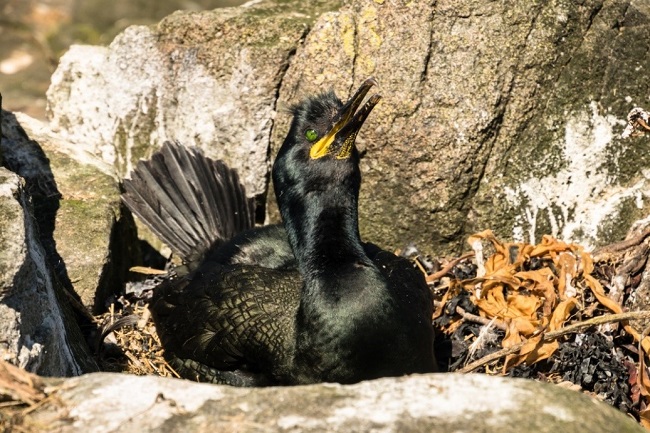 From photographs of the nests and plastic found in pellets of regurgitated food remains at the nest site, they were able to compare types and colour of ingested plastic and plastic incorporated in the nest. If the likely source of plastic in nests is from plastic debris that birds ingest while foraging in populated areas, then the researchers would have expected a high similarity between plastic debris in pellets and nests.

“But the plastic types in their diet were different from those found in the nest, which tells us that the plastic in nests arrived by different means,” Said Dr Nager.

The researchers also mapped all nests on the island and tested whether nests with plastic were equally distributed across the island. Results showed that nests on the north of the island, which are closer to the outgoing tide from the mainland, were more likely to contain plastic. This suggests that the plastic in the nests came originally from the mainland and was washed up on the shore where the birds could collect it from the immediate surrounding of their nest.

Seabird populations are facing a global decline so it is important to understand all the pressures that they face. Seabirds interact with plastic pollution through ingestion, entanglement and nest incorporation. Plastic debris in nests may affect the birds in different ways. It can potentially affect the quality and properties of the nest with detrimental effects for the eggs and chicks.

Plastic in the nest can also lead to fatal entanglement of adults and chicks. Monitoring plastic in nests using photographs to assess the type and quantity of plastic in nests can allow scientists to monitor changes over time as well as tell them where the plastic came from. Identifying the potential sources of plastic can inform conservationists, allowing them to develop management actions, such as targeted beach cleans, which may reduce any negative impacts on our struggling seabird populations.

Seabirds are building and rebuilding their nests just now as British people – responsible for putting their debris in the environment in the first place – are in lockdown.

“It will be interesting to see what seabird nests are made of this season,” said Dr Nager.