Clyde in the Classroom celebrates 20 years of river ecology

The Clyde in the Classroom project, led by the Clyde River Foundation, which is based at the University of Glasgow, began in 2001 and has, to date, inspired more than 30,000 children to learn about river ecology and wildlife in their local area. The project sees brown trout egg hatcheries brought into all participating schools, with pupils and teachers taught how to maintain water quality and look after the fish as they hatch and grow. After several weeks, the Clyde River Foundation team help the children release their fish. 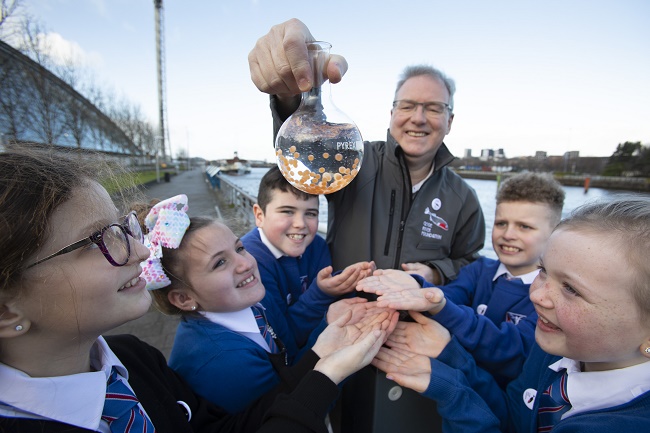 The innovative project is aimed at pupils in schools around the River Clyde catchment, taking in eight local authority areas, including Glasgow and as far afield as Inverclyde, Renfrewshire and South Lanarkshire. Pupils are encouraged to learn more about river ecology, sustainability and causes of pollution through hands-on learning and excursions to accessible river areas.

This year, Clyde in the Classroom will reach 3,150 pupils from 120 classes in 105 schools from the eight local authorities around the River Clyde system. The project will launch on the January 8 at the Glasgow Science Centre, as hundreds of children descend on the venue over the course of six days to learn about the ecology and history of the River Clyde, and how to care for their hatcheries. Glasgow Science Centre has been a partner of the project since its inception.

“For the past 20 years we have been building a Clyde in the Classroom community across our eight counties, working with around 75% of primary Schools in the overall River Clyde catchment area. We are proud to have enthused over 30,000 Future Stewards to date, all of whom now have a good understanding of the river, what lives in and beside it, and the effects of pollution and other threats.”

Tara Gibson, Senior Learning Co-ordinator at Glasgow Science Centre said, “At 20 years, Clyde in the Classroom is our longest continually running partnership project and we look forward to working with the Clyde River Foundation team and the children who take part in this fantastic project each year.  The environmental citizenship learning involved in Clyde in the Classroom has never been more relevant and topical as we focus on looking after our planet.  The project is chock full of cross- curricular potential and is a unique opportunity for the children to discover nature on their doorstep.”

The Clyde River Foundation was founded in 1999 to improve the understanding of river and fisheries management in the River Clyde system. The Foundation employs five full-time scientists and is based within the University of Glasgow’s Institute of Biodiversity, Animal Health and Comparative Medicine

Fiona Simpson, Asset Manager at Crown Estate Scotland, said: “We have been a proud supporter of this outstanding educational project for a number of years and are delighted to do so again in its 20th anniversary year.

“We lease the rights to fish for salmon across the Clyde to local angling associations and this venture is hopefully creating some informed future anglers as well as educating children about their local rivers. It is a great example of collaboration with partners to inspire sustainable thinking across the communities we serve.”