Just 14% of people in the world population have access to palliative care services that allow people to die with dignity and alleviate their suffering, according to new research led by the University of Glasgow.

And more than half of the world’s population – mainly in low and middle-income countries – have very poor or non-existent access to palliative care. 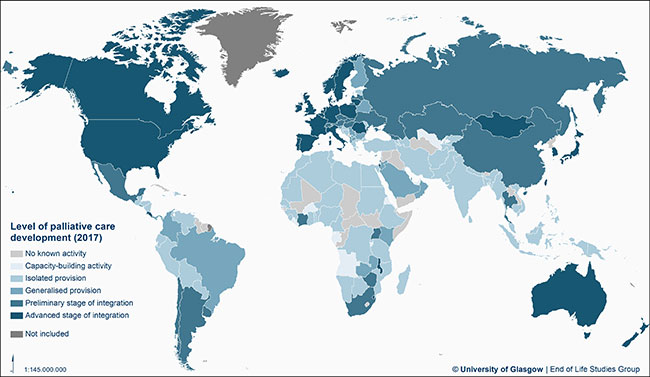 The delivery of palliative care is now seen as a global health issue - but the new study shows that palliative care services are lagging behind the rapidly growing need for specialised care that can relieve suffering at the end of life.

Led by Professor David Clark at the University of Glasgow, the study found that only 30 countries from 198 in the world have sophisticated levels of palliative care provision that are fully integrated into the health and social care system, covering just 14% of the global population.

Study collaborator Professor Carlos Centeno, of the University of Navarra in Spain, added: “Our research shows how much there is still is to do in this field. It is time to demand from policy-makers greater efforts to improve access to palliative care education and training for professionals and to incorporate palliative care into national health systems.”

With an 87% increase predicted by 2060 in serious health-related suffering that can be relieved by palliative care services, the study calls for a major review of global policies to promote palliative care.

Study collaborator and Chief Executive of the Worldwide Hospice and Palliative Care Alliance Dr Stephen Connor said: “The 2014 World Health Assembly resolution calling for the strengthening of palliative care in all countries is not being realised and millions of patients and families are suffering unnecessarily due to the slow progress in global palliative care development.”

Professor Clark said the research team had significantly improved the methods for conducting this study when compared to its two previous versions, incorporating appropriate indicators of palliative care development drawn from the recent literature and using a more transparent, statistically justified algorithm for the analysis.

“This is the most robust analysis to date of the level of palliative care development in almost all countries of the world. We categorise each country into one of six levels of development, show how many countries are now at each level, and also map these onto the proportions of the global population in each category - revealing that half the global population has little access to specialised palliative care,” he added.

Policy-makers, activists and third-party funders involved in palliative care are acutely aware of the limited evidence that exists about development in the field, particularly in low and middle-income countries, said Professor Clark.
The World Health Assembly has endorsed the need for all countries to develop national strategies for palliative care provision. The research team’s analysis of 198 countries in 2017 casts some doubt, however, on the effectiveness of recent global strategies.

“It provides powerful evidence for a renewed focus on palliative care development and implementation, building on the infrastructure we have identified, if the growing levels of health-related suffering at the end of life are to be addressed,” he concluded.