Treatment could offer hope for brain bleeding and stroke

A drug treatment, already approved for use in patients, could offer new hope for some patients with brain bleeding and strokes. 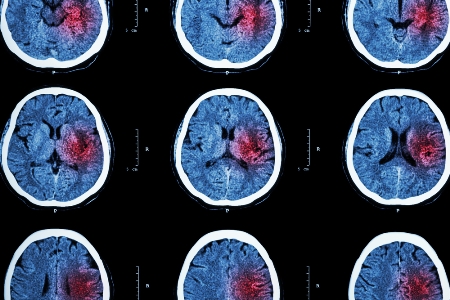 New research, led by the University of Glasgow and published today in Human Molecular Genetics, has shown that the compound sodium phenyl butyric acid could be used to reduce brain bleeding which can cause strokes when it is caused by a defect in a gene called collagen IV.

Mutations in these genes cause a genetic form of eye, kidney and vascular disease which affects the blood vessels in the brain and can cause brain bleeding, even in childhood.

The researchers, which included collaborators from the Universities of Manchester and Edinburgh, studied mice that have a similar defect in the collagen IV gene and develop the same disease as patients. Using sodium phenyl butyric acid they were able to reduce brain bleeding. However, the treatment did not treat either the eye or kidney disease associated with these genetic defects.

As a result, the researchers believe that for future treatments, patients with these mutations will need to be divided into groups based on their symptoms and medical history, and the mechanism that causes the disease. Scientists believe that this precision medicine approach will allow for better, more targeted treatment for patients.

While these genetic forms of the disease are rare, the same gene has also been implicated in common forms of brain bleeding in the general population, potentially increasing the number of people that may ultimately benefit from this work.

Further research is now required to understand how these mutations cause the disease in the different tissues so that strategies for treating all the clinical symptoms, including the eye and kidney disease, can be developed.

Research will also be developed to explore how, and if, a similar treatment strategy could be applied to humans with brain bleeding caused by these genetic alterations.

Specific treatments that target brain bleeding, including common diseases such as haemorrhagic stroke that accounts for 15% of adult stroke, are currently lacking. Researchers now hope these new insights will be able to lead to new treatment opportunities for patients with these conditions.

Dr Tom Van Agtmael, the lead author of the study from the University of Glasgow, said: “There are no treatments for diseases due to collagen IV mutations and brain bleeding. This work has identified a potential treatment strategy in mice and is the first step in translating this to patients. It will also help to identify for which patients this strategy may be effective and for which patients it is not recommended or may be counter-indicative. This personalised approach to medicine will be important to develop the most effective future treatments.”

The paper ‘Sodium phenyl butyric acid has both efficacy and counter-indicative effects in the treatment of Col4a1 disease’ is published in Human Molecular Genetics. The work was funded by The Medical Research Council (MRC), Kidney Research UK and the British Heart Foundation.