Measuring grip strength – a clinical test that is both cheap and easy to perform – could be an important way to identify people who are at high risk for a wide range of diseases. 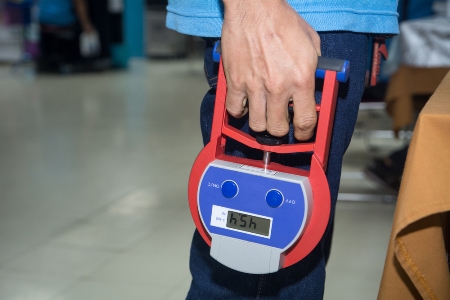 New research, led by the University of Glasgow’s Institute of Cardiovascular and Medical Sciences and published today in the BMJ, found that lower grip strength was strongly associated with a wide range of poorer health outcomes, including cardiovascular disease and cancer. The study also demonstrated that higher grip strength was associated with a lower risk of all causes of mortality.

The grip strength test only takes a few seconds to do and, the researchers suggest that the addition of this test within clinical practice could improve the prediction ability of an office-based risk score (which currently comprises assessment of age, sex, diabetes status, body mass index, systolic blood pressure, and smoking), by identifying people with low grip strength that might benefit from further health assessments. Researchers believe that this may be of particular use in areas where access to blood biochemical measures, such as cholesterol, is not possible.

Lower muscle strength is already known to be associated with greater mortality and morbidity. However in this study researchers were able to specifically link lower grip strength to a higher incidence of and mortality from, cardiovascular disease, respiratory disease, chronic obstructive pulmonary disease and cancer.

The study looked at 500,293 participants from the UK Biobank and the associations between lower grip strength and adverse health outcomes were consistent between men and women.

Researchers also investigated if the grip strength risk differed by age, and found that the risks associated with low grip strength were slightly stronger in younger age groups. These findings suggest that measuring grip strength could be useful over a broad range of ages.

Lead author Dr Stuart Gray, Lecturer in Exercise and Metabolic Health, said: “Many studies have already shown that lower muscle strength is associated with greater mortality and morbidity. We wanted to investigate the association of grip strength with the incidence of specific diseases and mortality, and whether grip strength could be used in the clinic to enhance the prediction of an established office-based risk score.

“We found that not only was lower grip strength strongly associated with a broad range of adverse health outcomes, but that it predicted risk of death and cardiovascular disease even more strongly than systolic blood pressure or physical activity.”

Dr Gray said: “Our findings are important because they indicate that the addition of the measurement of grip strength may be useful in screening for risk of cardiovascular disease in community or rural settings, and in developing countries where access to measurements, such as total cholesterol, is not possible.

“Going forward, we need to perform trials which measure grip strength in clinical settings and investigate its effectiveness in risk prediction.”

The UK Biobank is made up of 502, 628 participants recruited between April 2007 and December 2010, aged 40-69 years, from the general population across England, Wales, and Scotland.

The paper, ‘Associations of grip strength with cardiovascular, respiratory, and cancer outcomes and all cause mortality: prospective cohort study of half a million UK Biobank participants’ is published in the BMJ.