The University of Glasgow today commemorates the centenary of the Royal Air Force by highlighting the story of the true but often forgotten father of the service.

Lieutenant General Sir David Henderson, one of the University’s former students who learned to fly at 49, played a vital role in the foundation of the RAF on 1 April 1918.

Now the University will highlight his story as part of an RAF centenary exhibition which also features stunning paintings by Professor Dugald Cameron OBE, one of the UK’s leading aviation artists.

Professor Cameron’s art depicts a selection of representative aircraft flown by the RAF from 1918 to the present day. It is being display as part of the exhibition - Wings to War: Glasgow and the Centenary of the Royal Air Force - which opens to the public on Wednesday 28 March, 2018.

The exhibition is being held the University Chapel, which has played a key role in the University and Glasgow’s First World War centenary remembrance.

Reverend Stuart D MacQuarrie, the Chaplain to the University, said: “The University lost 761 members of its community in the First World War. During the four years of the centenary commemorations, we have helped to remember and tell the stories of those from our ranks who made the ultimate sacrifice. 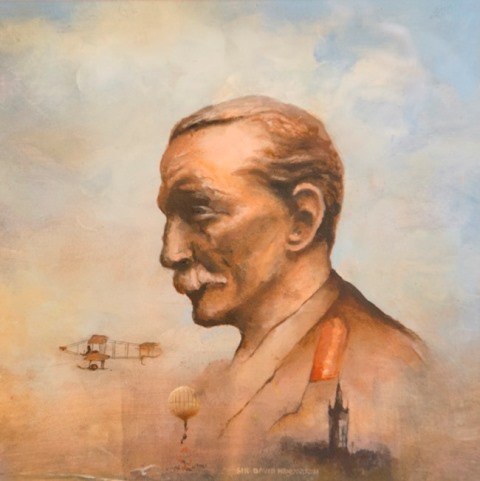 “The University Chapel has the names of all of those who died inscribed on its walls. And over the centenary it has been at the heart of the many University First World War events. We are honoured to host this centenary exhibition and remember those alumni who played such a vital role in the development and history of the RAF.”

The exhibition traces the history of the RAF through the stories of those who served from University students & alumni to the city of Glasgow connections with the service.

Professor Cameron OBE said: “Two great Glaswegians played significant roles in the creation of the RAF and then its continued existence.‌

“Lt General Sir David Henderson, up to now the 'forgotten father' of the RAF, student at the University of Glasgow under Lord Kelvin and immediately after WW1, Sir (later Lord and 1st Viscount) William D Weir, honorary graduate of the University.

“This exhibition pays tribute to the founders and commemorates those who served, many of whom paid the supreme sacrifice, named on this Chapel.”

Listen to Professor Tony Pollard, Professor of Conflict History and Archaeology, and Local Girvan historian Tom Barclay speak to BBC about the father of the RAF

The Royal Air Force was established in 1918 by the amalgamation of the Royal Flying Corps and Royal Naval Air Service. On the same day, the Women’s Royal Air Force came into being.

Lt General Sir David Henderson learned to fly at 49 before the outbreak of war. He was appointed Director-General of Military Aeronautics in 1913 and assumed command of the Royal Flying Corps in the field at the outset of war in 1914.

His combination of interests and expertise – both in intelligence and aviation – ensured the Royal Flying Corps playing a leading and vital part in intelligence gathering and reconnaissance throughout the war.

In 1917, he was seconded to work with General Jan Smuts who had been authorised to conduct a review of the British Air Services. Lt General Sir David Henderson largely wrote the Smuts report and his view that there should be a single aviation service was key to the foundation of the RAF.

Jesper Ericsson of the Hunterian Museum, who curated the exhibition, said: “Visitors will be able to explore fascinating stories of individuals from the University of Glasgow who served with the RAF, from its beginnings through to the present day.

“Former students and alumni played key roles in the history of military aviation in this country, and helped make the RAF the most famous air force in the world. This very special connection is something Glasgow should be justifiably proud of.”

During the Second World War, the RAF waged a worldwide campaign. Some 444 students entered the service as pilots and aircrew through the University Air Squadron, established in January 1941.

This global commitment continued throughout the Cold War, in particular the 1982 campaign to liberate the Falkland Islands.

Missions in recent years have seen the RAF’s role change as it tackles unconventional insurgent groups. Reconnaissance and intelligence gathering, one of the RAF’s primary roles since the inception of the RFC in 1912, is more important than ever.

Glasgow graduates continue to join the ranks of the RAF, having served in the Universities Air Squadron. Air Marshal Stuart Atha CB DSO MABSC is one such former student. He was commissioned in 1984 and has since flown operationally in the UK, Balkans, Iraq and Afghanistan.