Professor Stephen Barnett of the University of Glasgow’s School of Physics and Astronomy has been awarded a prestigious Royal Society Research  Professorship. 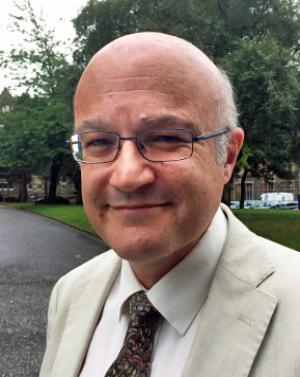 The Fellowships, which run for up to 10 years, provide scientists with long-term support to allow them to focus on research and collaboration based at an institution in the UK. The scheme provides salary costs, a one-off start-up grant and research expenses.

Professor Barnett is one of just six researchers to receive a Research Professorship in the Royal Society’s latest round of announcements. He joined the University in 2013 after 22 years at the University of Strathclyde, and his wide-ranging and research interests include quantum optics, electrodynamics and chiral chemistry.

He plans to use the Research  Professorship to expand his research in quantum optics with chiral molecules, which could lead to important advances for medical research and drug discovery. He will also work to push the limits of optical metrology to improve the effectiveness of super-sensitive detectors such as those which measure gravitational waves, and facilitate the construction of intricate nanoscale structures.

Professor Barnett, the University’s Cargill Chair of Natural Philosophy, said: “I’m very pleased and proud to be named as a Royal Society Research Professor, which I believe is the most prestigious award of its kind in the UK.

“This award will allow me to spend the next decade concentrating solely on research in some of the most exciting areas of physics, and I’m very much looking forward to getting started.

“Just as importantly, though, the fact that my salary costs will be covered by the award will allow the University to appoint a promising researcher and expand even further the School of Physics and Astronomy’s knowledge base.”

John Skehel, Vice President of the Royal Society, said: “The scientists awarded the 2016 Research Professorships are amongst the world’s most distinguished. All six have already made outstanding contributions to science and society and we hope that the professorships will support their current projects, as well as opening up new opportunities to enable them to continue their exceptional work.”