‌A film featuring skateboarders, and involving the University of Glasgow’s Urban Studies researchers, has been named Best Research Film 2016 in the AHRC Research in Film Awards, 2016. 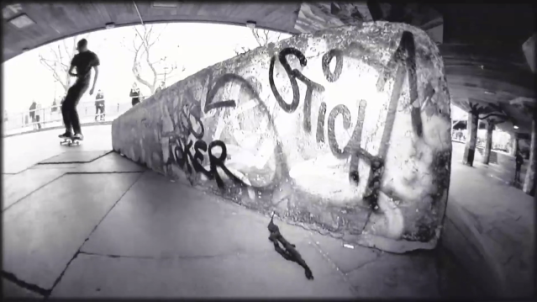 ‘You Can’t Move History. You Can Secure The Future’ was an Arts and Humanities Research Council funded project which looked at young people’s attachment to subcultural spaces - in this instance the undercroft on London’s South Bank which is an iconic location for skateboarders.

Academics from the University of Glasgow (School of Social and Political Sciences) with Sussex, UEA and Newcastle, worked together with the community film makers the Brazen Bunch and the Heritage Lottery Fund to ask how young people conceptualise their cultural heritage, the methods by which they have sought to communicate their feelings, and the way in which these messages have been understood and acted on by mainstream ‘formal’ institutions. The Research in Film awards are organised by the AHRC.

You can watch the result here:

The UofG’s contribution was led by Dr. Rebecca Madgin, Senior Lecturer in Urban Development and Management in Urban Studies. She told Campus e-News: “We are all absolutely thrilled and proud to have won this prestigious accolade.

"The film was judged by a panel of expert judges: Jan Dalley, Arts Editor of the Financial Times, Danny Leigh, Writer and Broadcaster, Professor Tom Inns, Glasgow School of Art and Joanna Callaghan, University of Sussex and so we are delighted they chose our film. The award ensures the project also receives a further £2000 to contribute towards future film-making and we are looking forward to developing our ideas with our partner organisations.”

Rebecca currently researches the economic and emotional values of heritage in relation to urban development. Her work is located in an international context spanning the twentieth and twenty-first centuries, and she is the author of Heritage, Culture and Conservation: Managing the Urban Renaissance (VDM Verlag, 2009) as well as the joint editor of Cities Beyond Borders: Comparative and Transnational Approaches to Urban History (Ashgate, 2015). Rebecca is also a member of the editorial board of the Institute of Historic Building Conservation’s publication ‘Context’ and is an associate member of the Royal Town Planning Institute.