Burning questions up for debate at The Barras Social

What does an entrepreneur look like? There are undoubtedly plenty of them at the Barras market in Glasgow’s east end - but it’s not usually the hottest topic of conversation. That could well change when that – and many other burning questions - are introduced by social science researchers from the University of Glasgow.

The researchers are setting out their social science stalls at “The Barras Social” - an event which is part of the Economic and Social Research Council Festival of Social Science. One of its key aims is to increase awareness of the contributions that social sciences make to the wellbeing and the economy of the UK society. 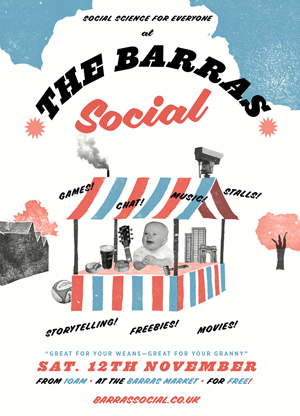 To this end, social science researchers will be offering demonstrations, games, exhibitions, music and film throughout the day, looking into some of the big questions about social justice and change in our society.

So close to Glasgow Green, they’ll be examining the place of green spaces in the “dear green place” and tackling major issues affecting society, community, and wellbeing, asking questions including:

Professor Anton Muscatelli, Principal and Vice-Chancellor of the University of Glasgow, said: “Fittingly, this event takes place just a few hundred metres from where the University of Glasgow was founded, at the very centre of what once was Glasgow trading life. Taking place alongside normal trading in the Barras market, we hope the slightly unusual sight of our researchers trading their research ‘wares’ will bring something a bit new, interesting and fun, and stimulate more than a few conversations! We know that we can only continue to produce excellent academic research with the support and engagement of the public and so we’re delighted to spend and share the ESRC Festival of Social Science with our local community.”

One of many highlights of the day will be the screening of the critically acclaimed documentary ‘The Divide’ at nearby Pipe Factory. Inspired by the best-selling book 'The Spirit Level', the film tells the stories of seven people striving for a better life in the modern-day UK and US - where the top 0.1% owns as much wealth as the bottom 90%. The only Scot featured in the documentary, Darren McGarvey (better-known as rapper Loki), will join the film’s director, Katharine Round, in an open discussion of the issues raised by the film .

Professor Anne Anderson, Vice-Principal and Head of the College of Social Sciences, will chair the event. She said: “The inequality gap and how it impacts upon people’s lives is the focus of this important documentary, ‘The Divide’. Our social science researchers at the University of Glasgow are doing vital work around how people’s lives are affected by social justice, health and other inequalities. We want to share our work with people in Glasgow and hear their views on how society could be changed for the better.”