Philosopher and cultural theorist Professor Kwame Anthony Appiah will be guest speaker at the annual BBC Reith Lecturer 2016, hosted this year by the University of Glasgow. 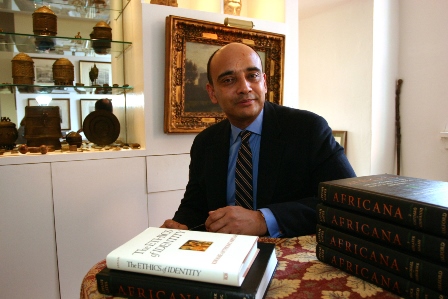 Kwame Anthony Appiah, a British-born, Ghanaian-American philosopher, cultural theorist and novelist, specialises in moral and political philosophy, as well as issues of personal and political identity, cosmopolitanism and nationalism.

He will deliver four lectures, entitled ‘Mistaken Identity’, with each having a different focus – Colour, Country, Creed and Culture. They will be recorded in London, Glasgow, Washington DC, and in Appiah’s adopted hometown of New York. The Reith Lectures will broadcast in November.

The Glasgow lecture will be the second of the four lectures and will be looking at country. It will be recorded before a live audience at the Sir Charles Wilson building on October 7, and the lecture will be broadcast on BBC Radio 4 on October 25, and at a later date on the BBC World Service.

“There is much contention about the boundaries of all of these identities. Not everyone accepts that you have to be a man or a woman; or that you can’t be both an Englishman and a Scot. You can claim to be of no religion or gender or race or nation. Perhaps, in each case, someone will believe you. And that is one reason why the way we often talk about these identities can be misleading.”

Mr Appiah believes there are profound sources of confusion in our thinking about identities. Indeed, almost every identity grows out of conflict and contradiction, and their borders can be drawn in blood. And yet they can also seem to fade in the blink of an historical eye.

The demands of identity can seem irresistible at one moment, absurd at the next. Most of us swim easily in the swirling waters of our multiple affiliations most of the time, but we can be brought up short in moments when the currents of identity tug us excruciatingly in opposite directions.

He adds: “In these lectures I want to explore some of these confusions through an examination of four central kinds of identity: creed, country, colour and culture. Through the lives of particular people in particular places and times, we’ll see how the confusions play out, but also how they can be cleared up.

“We’ll learn how those identities play both positive and negative roles in their lives and in ours, and how we might escape some of the negatives if we understood some of the many mistakes we make about identity.”

The Reith Lectures are presented by Sue Lawley and the recordings will be open to the public. Tickets are free and available to book through Eventbrite:
Details about their locations and how to apply for tickets will be announced in due course