Impact of WW1 on Academia and Business

The significant roles staff and students of the University of Glasgow played during the Great War, including those who lost their lives, is being discussed at a one-day conference at the university (Wed March 2).

A high proportion of University of Glasgow’s students and staff died while serving in the First World War and the impact was immediate. A total of 4,506 staff, students, graduates, and members of the University Officers’ Training Corps signed up during the war, with 761 eventually losing their lives.

The university was a recruitment ground for the war, in the month of October 1914 alone 14% of male students signed up, while at an event at the Glasgow University Union nearly 300 students volunteered to serve with the Cameron Highlanders. 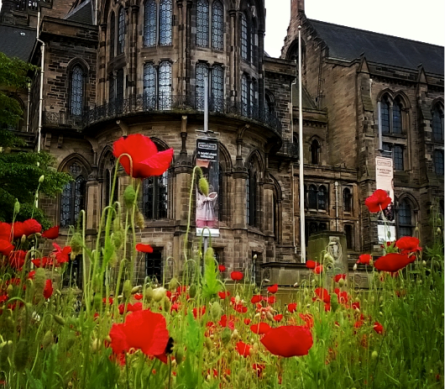 The impact of the war effort on the University and its community is one of the research areas being presented at the ‘Business as Usual? Institutional impact in the First World War’ conference, hosted by the University of Glasgow.

Such was the clamour to sign up from university staff and students that by February 1915 a total of 1,255 men had joined the Officers’ Training Corp. By 1916, male enrolment at the university was 909: half of what it was in 1914.

Dr Tony Pollard, the University of Glasgow’s senior lecturer in History and Battlefield Archaeology, who is hosting the conference, said: “The bravery of the students and staff was typical of the time. They felt compelled to take direct action and of course many of them ended up paying with their lives.

“The war draft had significant implications for the University, and the University had to adapt accordingly. In 1914 special arrangements had to be made for students who wanted to sign up to the war effort, particularly with exams. Final exams and graduations had to be brought forward in order to allow medical students to go off to serve. While many graduates were already pursuing a military career by 1914, there was a tremendous rush by other staff and students to sign up, so the impact on the university was considerable.” 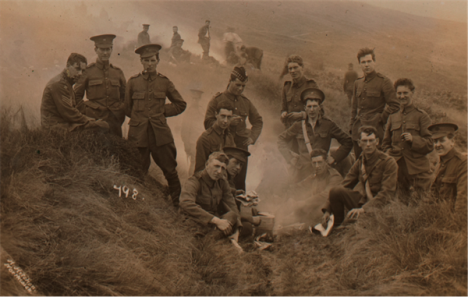 And it was not just the men affected by the Great War effort.

Dr Jennifer Novotny, a research assistant in History at the University of Glasgow, said: “University of Glasgow women fulfilled a variety of roles during the war. Writing in the Glasgow University Magazine, women in 1914 showed frustration at the lack of opportunities to serve in contrast to their male colleagues and some rightly suspected that increased roles and responsibilities would be temporary. Despite this, they found ways to contribute to the war effort, from managing munitions work at HM Factory Gretna to running hospitals at the front or volunteering as part-time nurses at home.

“The university’s women’s college, Queen Margaret College, actively recruited women volunteers and collected data on their professional skills as part of the government’s call for qualified women to undertake the work of men absent on war service. Women were very conscious of how their war contributions could pave the way for gains in voting rights.”

Throughout the war, the University kept track of its students, staff, graduates, alumni, and members of the University Officers’ Training Corps who were on active service. This resulted in a number of printed Rolls of Service during the war years and a final Roll of the Fallen published after the war.

The chapel at the University of Glasgow, constructed in the 1920s, is the university’s memorial to those who died in the First World War. Plaques on the interior walls are inscribed with the names of the 761 who died.
In 2005 the University Archives created an online database of the Roll of the Fallen, expanding it to include the names of nearly 4,000 more men and women who served and survived.

Throughout the First World War centenary, the University of Glasgow is remembering the lives of each member of its community lost during the 1914-18 conflict. Biographies are constantly being added and updated and war dead are remembered on or near the centenary of their deaths during daily morning pray services in the chapel, after which a poppy cross is planted in a First World War Memorial Garden near the main gates of the University.

“Throughout the day we will reflect upon how businesses, institutions and other corporate entities were impacted by the participation of staff, students and colleagues during the First World War, and how the war changed or redefined these communities.”

Some of the other areas being discussed are how the mining industry coped with a reduced workforce, the experiences of white-collar workers, the war’s impact on museums, and how unions and benevolent societies supported their members during the financially difficult war years.

Notes to editors: ‘Business as Usual? Institutional impact in the First World War’ conference is being held on Wednesday 2 March, 2016, 09.00-17.00, in the Senate Room, University of Glasgow.