Professor Sheila Rowan, Director of the University of Glasgow’s Institute for Gravitational Research, has been named as the winner of one of the Institute of Physics’ 2016 awards for her work in gravitational waves. 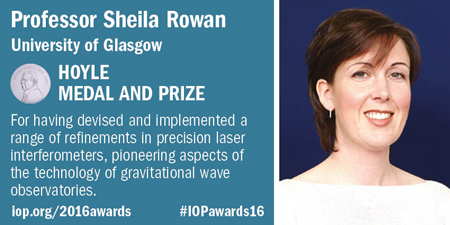 Recently appointed as Scotland’s new Chief Scientific Adviser, Professor Rowan said: “I am honoured to receive the Institute of Physics Hoyle Medal and prize and would like to acknowledge the extraordinary contribution of my colleagues at the Institute for Gravitational Research and across the UK field."

The IOP today announced the winners of its medals and prizes for 2016, in recognition of outstanding work by physicists in research, leadership, outreach and engagement

The IoP said that Professor Rowan was being recognised “for having devised and implemented a range of refinements in precision laser interferometers, pioneering aspects of the technology of gravitational wave observatories”.

The discovery not only confirms a prediction of Einstein’s general theory of relativity but potentially opens up a completely new window into the universe.

Interferometric gravitational-wave detectors operate by using laser-interferometry to sense the movements of mirrors at the ends of perpendicular arms where motions are induced by the effects of gravitational signals produced by astrophysical events. The inherent weakness of the gravitational force means that by the time signals from distant events reach the Earth, their effect on such mirrors is movement of 10-18m or less.

This is a daunting measurement challenge, which has required decades of development. Professor Rowan has made major contributions to the GEO 600 detector in Germany and her design features were incorporated into the Advanced LIGO gravitational wave detector in the US, which made the first ever detection of gravitational waves. Related developments will be installed in its French-Italian counterpart, Advanced Virgo.

She is also leading research into cryogenically cooled silicon as a test mass and suspension material, which she was the first to realise was important in dealing with thermo-elastic thermal noise. This has stimulated activity in gravitational-wave research groups globally, with Professor Rowan’s group in Glasgow again pioneering developments at the forefront of low-noise suspension design, in parallel with studies of the optical and mechanical properties of novel mirror coatings for use on cryogenic silicon mirrors.

Professor Rowan was elected chair of the Gravitational Waves International Committee in 2015. She is a fellow of the IOP and of the Royal Astronomical Society, the Royal Society of Edinburgh and the American Physical Society. She was awarded a Leverhulme Prize for Astronomy and Astrophysics in 2005 and a Royal Society Wolfson Merit Award in 2010, and was made an MBE in 2011.

Altogether 16 medal winners have been announced, with the most prestigious of the prizes, the Newton Medal, going posthumously to Professor Tom Kibble from Imperial College London, who passed away on 2 June.

Professor Kibble, renowned throughout the physics community as a dedicated and passionate theoretical physicist, paved the way for some of the greatest recent discoveries within physics. Kibble was one of the first physicists to propose the concept of a mass-giving particle, now known as the Higgs Boson, back in 1964, nearly fifty years before the particle was discovered by researchers at CERN.

Four Gold medals have also been awarded today: one to Professor Sandu Popescu from the University of Bristol for his work in quantum physics; another to Professor Jenny Nelson from Imperial College London for her work in semiconductor development; also to Dr Graeme Malcolm for the success of his laser manufacturing company M Squared Lasers; and to Professor Hugh Montgomery, director of the Thomas Jefferson National Accelerator Facility, for outstanding leadership in his field.

President of the IOP Professor Roy Sambles said: “The IOP Awards recognise outstanding individuals and teams within our physics community, not only to celebrate their creativity, hard work and dedication but also to inspire others to strive to achieve excellence in what they do.

“The recipients represent some of the best and brightest minds involved with physics in academic and industrial research, in education and in outreach.”