The European Space Agency’s LISA Pathfinder mission, in which University of Glasgow former and current scientists played a significant role, has demonstrated the technology needed to build a space-based gravitational wave observatory. 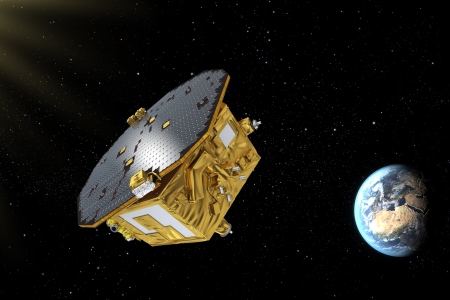 Results from only two months of science operations show that the two cubes at the heart of the spacecraft are falling freely through space under the influence of gravity alone, unperturbed by other external forces, to a precision more than five times better than originally required.

In a paper published today in Physical Review Letters, the LISA (Laser Interferometer Space Antenna) Pathfinder team show that the test masses are almost motionless with respect to each other, with a relative acceleration lower than 1 part in ten millionths of a billionth of Earth’s gravity.

The demonstration of the mission’s key technologies opens the door to the development of a large space observatory capable of detecting gravitational waves emanating from a wide range of exotic objects in the Universe.

Hypothesised by Albert Einstein a century ago, gravitational waves are oscillations in the fabric of spacetime, moving at the speed of light and caused by the acceleration of massive objects.

They can be generated, for example, by supernovas, neutron star binaries spiralling around each other, and pairs of merging black holes.

Even from these powerful objects, however, the fluctuations in spacetime are tiny by the time they arrive at Earth – smaller than 1 part in 100 billion billion.

Sophisticated technologies are needed to register such minuscule changes, and gravitational waves were directly detected for the first time only in September 2015 by the ground-based Laser Interferometer Gravitational-Wave Observatory (LIGO).

This experiment saw the characteristic signal of two black holes, each with some 30 times the mass of the Sun, spiralling towards one another in the final 0.3 seconds before they coalesced to form a single, more massive object.

The signals seen by LIGO have a frequency of around 100 Hz, but gravitational waves span a much broader spectrum. In particular, lower-frequency oscillations are produced by even more exotic events such as the mergers of supermassive black holes.

With masses of millions to billions of times that of the Sun, these giant black holes sit at the centres of massive galaxies. When two galaxies collide, these black holes eventually coalesce, releasing vast amounts of energy in the form of gravitational waves throughout the merger process, and peaking in the last few minutes.

To detect these events and fully exploit the new field of gravitational astronomy, it is crucial to open access to gravitational waves at low frequencies between 0.1 mHz and 1 Hz. This requires measuring tiny fluctuations in distance between objects placed millions of kilometres apart, something that can only be achieved in space, where an observatory would also be free of the seismic, thermal and terrestrial gravity noises that limit ground-based detectors. 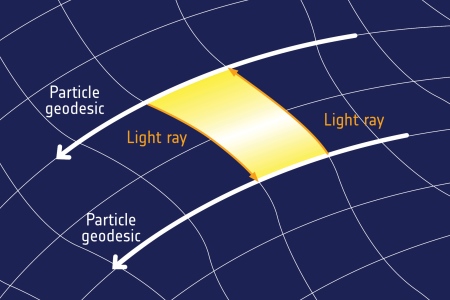 LISA Pathfinder was designed to demonstrate key technologies needed to build such an observatory.

A crucial aspect is placing two test masses in freefall, monitoring their relative positions as they move under the effect of gravity alone. Even in space this is very difficult, as several forces, including the solar wind and pressure from sunlight, continually disturb the cubes and the spacecraft.

Thus, in LISA Pathfinder, a pair of identical, 2 kg, 46 mm gold–platinum cubes, 38 cm apart, fly, surrounded, but untouched, by a spacecraft whose job is to shield them from external influences, adjusting its position constantly to avoid hitting them.

A team of scientists from the University of Glasgow’s Institute for Gravitational Research developed, built, and tested the incredibly sensitive optical bench interferometer that lies at the heart of the LISA Pathfinder. This instrument is capable of detecting changes in distance between the test masses as small as 10 picometres, or one hundred millionth of a millimetre.

The IGR also led on the conception, development, construction and installation of sensitive mirror suspensions at the heart of the ground-based LIGO detectors, which were crucial to the first detection of gravitational waves, announced to the world in February.

Dr Harry Ward, Reader in Physics and Astronomy and a member of the Institute for Gravitational Research at the University of Glasgow, described the results as “a spectacular success” which effectively gave the green light to embarking on the next stage – “to fly a spaceborne gravitational wave detector”.

“We want to detect super-massive black hole coalescences when galaxies collide but to do that we had first to prove you can make the super-sensitive measurements – and we have now done exactly that.”

Alvaro Giménez, ESA’s Director of Science, said: “LISA Pathfinder's test masses are now still with respect to each other to an astonishing degree.

“This is the level of control needed to enable the observation of low-frequency gravitational waves with a future space observatory.”

LISA Pathfinder was launched on 3 December 2015, reaching its operational orbit roughly 1.5 million km from Earth towards the Sun in late January 2016.

The mission started operations on 1 March, with scientists performing a series of experiments on the test masses to measure and control all of the different aspects at play, and determine how still the masses really are.

“The measurements have exceeded our most optimistic expectations,” said Paul McNamara, LISA Pathfinder Project Scientist, who was an undergraduate and PhD student at the University of Glasgow.

“We reached the level of precision originally required for LISA Pathfinder within the first day, and so we spent the following weeks improving the results by a factor of five.”

These extraordinary results show that the control achieved over the test masses is essentially at the level required to implement a gravitational wave observatory in space.

“Not only do we see the test masses as almost motionless, but we have identified, with unprecedented precision, most of the remaining tiny forces disturbing them,” explained Stefano Vitale of University of Trento and INFN, Italy, Principal Investigator of the LISA Technology Package, the mission’s core payload.

The first two months of data show that, in the frequency range between 60 mHz and 1 Hz, LISA Pathfinder's precision is only limited by the sensing noise of the laser measurement system used to monitor the position and orientation of the cubes. 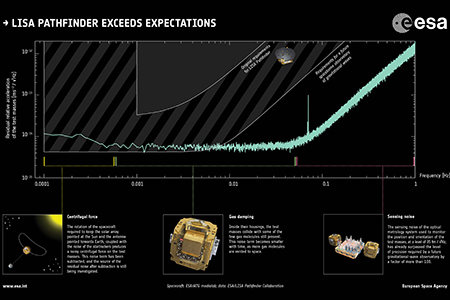 “The performance of the laser instrument has already surpassed the level of precision required by a future gravitational-wave observatory by a factor of more than 100,” said Martin Hewitson, LISA Pathfinder Senior Scientist from Max Planck Institute for Gravitational Physics and Leibniz Universität Hannover, Germany. He is also an alumnus of the University of Glasgow, where he did his undergraduate and PhD studies.

At lower frequencies of 1–60 mHz, control over the cubes is limited by gas molecules bouncing off them – a small number remain in the surrounding vacuum. This effect was seen reducing as more molecules were vented into space, and is expected to improve in the following months.

“We have observed the performance steadily improving, day by day, since the start of the mission,” said William Weber, LISA Pathfinder Senior Scientist from University of Trento, Italy.

At even lower frequencies, below 1 mHz, the scientists measured a small centrifugal force acting on the cubes, from a combination of the shape of LISA Pathfinder’s orbit and to the effect of the noise in the signal of the startrackers used to orient it.

While this force slightly disturbs the cubes’ motion in LISA Pathfinder, it would not be an issue for a future space observatory, in which each test mass would be housed in its own spacecraft, and linked to the others over millions of kilometres via lasers.

“At the precision reached by LISA Pathfinder, a full-scale gravitational wave observatory in space would be able to detect fluctuations caused by the mergers of supermassive black holes in galaxies anywhere in the Universe,” said Karsten Danzmann, director at the Max Planck Institute for Gravitational Physics, director of the Institute for Gravitational Physics of Leibniz Universität Hannover, Germany, and Co-Principal Investigator of the LISA Technology Package.

Today’s results demonstrate that LISA Pathfinder has proven the key technologies and paved the way for such an observatory, as the third ‘Large-class’ (L3) mission in ESA’s Cosmic Vision programme.