As the west coast of Britain emerges from yet another battering – this time caused by the “remnants” of the United States’ Winter Storm Jonas blizzards – new research has been published which reveals the extent to which our rocky coastline is being reshaped by extreme weather.

Dr Larissa Naylor, a Lecturer in Physical Sciences at the University of Glasgow, has just published research in a special issue of Earth Surface Processes and Landforms on Stormy Geomorphology. It uses data immediately before, during and after a storm, for the first time globally, to show that large boulders can shift daily in extreme weather. 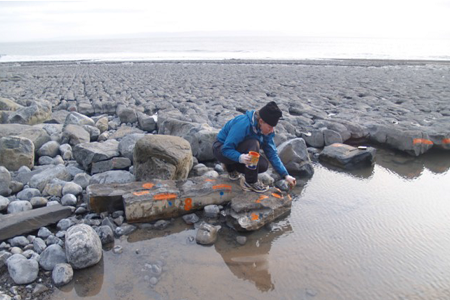 “These data show that we cannot assume that rock coasts change infrequently and they are thus at low risk to storm damage. They show us that rock coasts are dynamic and responsive to storms and that they generate and transport rock material along the coast towards beaches and barriers that often act as coastal defences,” said Dr Naylor.

Since November 12, 2015, the Met Office has named six extreme weather events as storms – from Abigail to Storm Frank and in the past week, the remnants of Storm Jonas from the U.S. have reached the UK. The most recent storms have shown the impact of flooding around internal river plains, but it is only two years since the railway lines at Dawlish on the Devon coast were swept away in storm conditions.

As recent climate models by other researchers suggest that winter storms will become more frequent and more intense in the Northeast Atlantic in the future, there is a growing need plan for such weather dynamics and adapt to living with a dynamic coastline.

Dr Naylor’s research was carried out in March 2008 at the time of an extra-tropical cyclone named Johanna which led to coastal erosion and flooding from Wales to Northern Spain. Her research showed that, “contrary to popular assumptions, rock coasts do erode quickly and that coastal boulders are transported up to 10s of metres daily under storm conditions in Wales”.

“The powerful waves were so strong that large (0.67 ton) boulders as long as an adult and heavier than a washing machine were lifted and flipped over while smaller, shoebox-sized boulders moved up to 50 m in 24 hours and over 90 metres in four days. Other boulders were broken into smaller pieces and the rock bed was ripped apart, creating new boulders,” said Dr Naylor.

“The data also show that rock coasts have the potential to supply – and break down – much more coarse sediment into our coastal environment than previously thought. We typically don’t know how much coarse sediment comes from rock coasts and how this might help supply material to coastal areas, which are losing sediment and increasing the erosion risk to people. It also shows that rocky coasts do erode under storms and as such may be more vulnerable to the effects of increased storminess than is currently planned for” she said.