UK Prime Minister Theresa May has today honoured a senior veterinary professor from Glasgow for leading a group of motorcycling vets fundraising for animal charities across the world.

Professor Derek Knottenbelt is the driving force behind ‘Vets with Horsepower’, a group of senior level vets who go on motorbike tours to raise funds for international animal charities and deliver veterinary training to their staff. 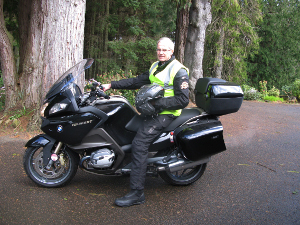 A senior professor at the University of Glasgow, Derek instigated the first tour to prevent the closure of a riding school for children with disabilities in Mali. The vets recently finished their sixth tour, which took place in South Africa for the benefit of two local horse care charities and a children’s home.

Derek is the latest recipient of a Point of Light award, which recognises outstanding individual volunteers, people who are making a change in their community and inspiring others. Each day, someone, somewhere in the country is selected to receive the award to celebrate their remarkable achievements.

Prime Minister Theresa May said: “Your initiative, ‘Vets with Horsepower’ takes a brilliantly innovative approach to raising funds for some very worthy causes across the world, as well as supporting charity staff with your team’s professional skills.”

Regardless of whether it’s a doctor restoring local monuments in her free time, a father teaching young people life skills, or a local musician giving a voice to lonely people, the Point of Light award honours shining examples of volunteering across the UK.

Derek said: “This award is truly amazing and I am both honoured and humbled by it. I am part of an amazing team of people who care deeply about the wider world and this is as much their recognition as mine.  It is simply amazing to be recognised in this way.”