Take a group of Primary 4 pupils from Govan, many of whom know little about its history, and immerse them in tales of Viking invasions and ancient Briton kingdoms. Show them the evidence in their community and observe as their young minds become engaged, enlightened and transformed. 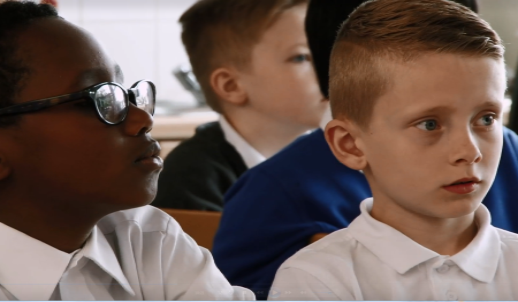 That was the aim behind the feel-good film ‘Govan Young’. A 30-minute study looking at medieval Govan through the eyes of a class of local school children, taking the viewer on the children’s journey as they learn about where they live and where they come from.

Initiated by Dr David Archibald, Senior Lecturer in Film and Television Studies at the University of Glasgow, and working with Martin Clark and Cara Connolly from Connolly Clark films, the film takes a group of P4 pupils from Govan’s Pirie Park Primary School on a journey.

At the start of the film when asked about Govan the children seem to focus on the negative sides of life. They know very little about the history and geography of the area.

The interviewer asks: “Where is Govan near?” The boy answers: “Govan is near Asda, Pizza Hut and Macdonald’s.”

“Would you have liked to live in Govan in the past?” “No because it was black and white.”

“Have you ever walked along the River Clyde in Govan?” “I’ve seen it from the window of Harvesters, I think”

The film then follows the children on a learning journey, aided by Professor Stephen Driscoll, an historical archaeologist at the University of Glasgow.

The camera observes them as they gradually engage with Govan’s Viking history, through re-enacting what happened in the 9th Century when the Vikings invaded Dumbarton, how the Briton King was killed and the vanquished forces were forced to retreat up the river to Glasgow, where they created a new settlement.

The children learn how the Vikings and the local Britons eventually learned to live side by side, and how their coexistence helped shape their homelands on the banks of the River Clyde at Partick and Govan.

Dr Archibald lived in Govan for thirty years and was keen for local people to learn more about their past. He said: “The aim of the film was to inform people about a part of their history that most people in Govan, and Glasgow for that matter, generally know nothing about. We wanted to try and approach it in a different way, to teach the past of Govan to the future of Govan, in an experimental but entertaining way.

“How Glasgow understands itself as a city is not based in any way on the incredible stories of medieval Glasgow and Govan. The area was home to Viking and Briton kings. Yet, when I talk to people about the Kings of Strathclyde coming to Partick and crossing the river and settling in Govan, most people look bemused. The understanding of this part of Glasgow’s history is almost non-existent. So that is what we set out to do, to tell the story but in a different way, and at the same time to pass the story on to the local children in a dynamic and entertaining way.”

The film shows how the group of seven to eight year olds start connecting with their past. They visit Govan Old Church, with its ancient graveyard of Kings, a royal sarcophagus and more than 45 burial stones, dating back to the 10th Century, and Doomster Hill, once the political centre and spiritual heart of the Kingdom of Strathclyde, until its demise in the 11th Century.

They are attacked by a group of Highland warriors from Gal Gael, a local group that attempts to develop a sense of community through an understanding of local history. The children clearly have a great day out. One boy as he leaves the church says: “This is the best day of my life.”

The children become enthused and develop a sense of pride in where they live, their views and opinions become more engaging, and some boast of teaching their parents what they have learned.

“My mum said ‘where are you getting all this from?’ coz she didn’t know….”one girl proudly tells her friend.

Dr Archibald said: “The stars of the film were definitely the children. We found that when we first spoke to them they were pretty despondent and negative about where they lived. But when they found out more about Govan’s medieval history it transformed how they thought about who they were, and about where they were from.

“We were interested in telling a story that most people in Glasgow don’t know anything about. You can watch the film and you can learn about the history in a slightly more experimental way.”

As one boy succinctly summed up: “I thought Govan was just a place where poor people lived…but it wasn’t, kings lived here…”