Sarah Cleaveland elected a Fellow of the Royal Society

Professor Sarah Cleaveland, Professor of Comparative Epidemiology at the University of Glasgow’s Institute of Biodiversity, Animal Health and Comparative Medicine, has been elected a Fellow of the Royal Society for her work on infectious diseases.

Her work, which is done mainly in Africa, saw her nominated in recognition of the impacts of her research on human and animal health.

Professor Cleaveland started her career working on rabies, a terrifying and deadly disease that still kills tens of thousands of people in Africa and Asia every year. The research programme she established in Tanzania has provided important evidence to change the way that rabies is being tackled around the world, and is underpinning international efforts towards the global elimination of rabies, which is now a declared objective of the World Health Organization, the World Animal Health Organization and the Food and Agriculture Organization.

Professor Cleaveland speaking about her nomination

Professor Cleaveland said:  “It is the most incredible honour to have been elected as a Fellow of the Royal Society – I am absolutely delighted. It has been very rewarding to see that research can have such an impact – and that we have a realistic prospect of ridding the world of rabies.

The Royal Society said: "Professor Sarah Cleaveland is the driving force into researching rabies elimination in the developing world. Her work has made this a realistic outcome by 2030."‌‌ 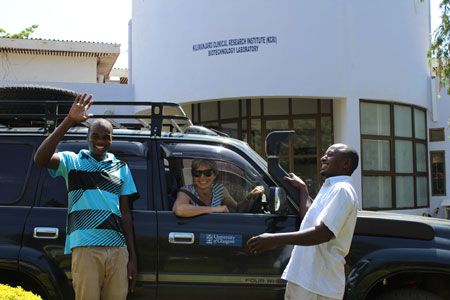 Building on her work on rabies, Professor Cleaveland is now tackling several other diseases that spread between animals and people (known as zoonotic diseases).

She is currently leading Livestock, Livelihoods and Health, a research programme in Tanzania funded under the Zoonoses in Emerging Livestock Systems programme. This focuses on a group of infections that have been largely neglected, but are an important cause of fever in people, and further affect people’s livelihoods through production impacts on livestock.

Last year Professor Cleaveland was awarded an OBE for services to veterinary epidemiology.