The University of Glasgow’s contribution to national life was recognised with three major awards at the inaugural Herald Higher Education Awards.

The University was named the Higher Educational Institution of the Year and the groundbreaking postgraduate Masters programme in Stratified Medicine received the award for Outstanding Employer Engagement. The Outstanding Contribution from a Student award went to University veterinary medicine student Ruby Shorrock for the Trusty Paws project, which helps maintain the health of the pets of homeless people. 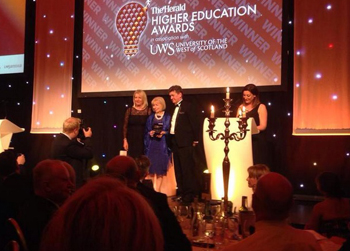 The awards, organised by The Herald newspaper in association with the University of the West of Scotland and hosted by broadcaster Catriona Shearer, celebrate the impact colleges and universities have on national life and their role in society. The awards event was held at the Grand Central Hotel in Glasgow.

“The Higher Education Institution of the Year award is a testament to the world-leading excellence of our research and teaching, which has been inspiring people to change the world since 1451. The Outstanding Employer Engagement award recognises our efforts to train a new generation of medical scientists to develop innovative, more effective forms of personalised medicine. The Outstanding Contribution from a Student award highlights a wonderful example of one of our students using her growing expertise to help society’s most vulnerable people.

“I’d like to congratulate staff and students for all their hard work.”

The University’s contribution was further acknowledged with six additional nominations at the award ceremony: