Researchers have created the most complete mapping of the route that Robert Burns took on his famous tours of the Borders, Highland, and Lowland Scotland. It has been published as part of a major new edition of the Bard’s prose work, the first time that Burns’s complete writings have been made available to the public in fully annotated and edited form.

Experts from the Centre for Robert Burns Studies at the University of Glasgow and National Library of Scotland have traced Burns’s tour itineraries on early 19th century roadmaps of Scotland and northern England. The maps, which are available online, will enable enthusiasts to follow Burns closely through the places and landscapes that inspired him. 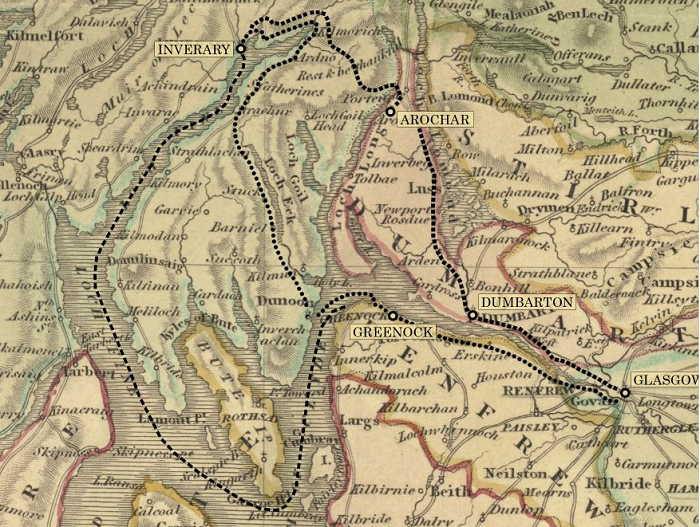 Working directly from the handwritten journal and letters that Burns wrote whilst journeying around Scotland and the north of England in 1787, as well as other related documents, literature experts from the University of Glasgow have retraced details of the routes which became hugely influential to his later work.

The Tour Journal, letters and other related documents tell us a lot about Burns’s ‘discovery of Scotland’ at the height of his fame. They detail the places he stayed and the people he met, along with wide ranging reflections on Scottish society, history and culture.

The tour journals, with accompanying maps, are included in the new ‘Oxford Edition of the Works of Robert Burns: Commonplace Books, Tour Journals and Miscellaneous Prose’, edited by Professor Nigel Leask, Regius Chair of English Language and Literature at the University of Glasgow.

Professor Leask said: “The tour journals are fascinating because they offer us an insight into the life of a poet who was operating at the peak of his powers and reaping the benefits of his new-found fame. These texts also show Burns ruminating on some of the pressing social and political issues of the day; far from the figure of the ‘heaven taught ploughman’, at this point he was keeping company with some of the wealthiest and most powerful people in the land.

“I hope that this research will inspire people to engage with the work of Burns and consider him as a man who reacted to his surroundings, not only spaces that he passed through, but the social, political and physical environments that he found himself in.”

The ‘Prose Volume’ also contains Burns’s Commonplace Books, containing early drafts of some of his most important poems and songs, as well as miscellaneous prose writings, ranging from the prefaces to the Kilmarnock and Edinburgh editions, through the poet’s blueprint for a working-class library in Dumfriesshire, to his correspondence in the newspapers touching on matters of contemporary political and social import.

The prose writings begin with the ‘Manual of Religious Belief’, associated with Burns’s early teens, and cover the whole span of Burns’s life, continuing through to his last years in the mid-1790’s. The volume contains work ranging from the First Commonplace Book, and prefaces to the Kilmarnock and Edinburgh Poems, through the poet’s blueprint for a working-class library in Dumfriesshire, to his correspondence in the newspapers touching on matters of contemporary political and social import.

When collected they record not only the development of Burns as a writer, but they also shed new light on his unique relationship to the literary and social culture of late eighteenth-century Scotland. Together they help explain how and why this humbly-born Ayrshire farmer became a poet of world renown.

The Commonplace Books, Tour Journals and Miscellaneous Prose volume is the first in a new, multivolume Oxford edition of the works of Robert Burns.

It is the first time that Burns’s complete writings have been made available to the public in fully annotated and edited form with texts fully transcribed from the original manuscript to modern scholarly standards and therefore represents a milestone in Burns scholarship.