Cabinet Secretary for Education visits the University of Glasgow

The Cabinet Secretary for Education, Angela Constance, met around 70 trainee teachers on Monday 19 January during her first visit to the University of Glasgow since her appointment to the Cabinet. Ms Constance, who graduated from Glasgow in 1991 and is a former President of the SRC, was welcomed by the Principal who said: “The University is proud of its key role in education and in teacher training.  We remain committed to strengthening the quality of what we do, and committed to ensuring that the School of Education goes from strength to strength. Our commitment to teacher training is underpinned by a very real belief in the value of education – for its capacity to transform lives, giving opportunity for people to grow, develop and flourish.” 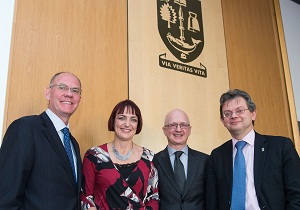 The Principal added that, “The new Scottish Cabinet is emphasizing the importance of combining wealth creation with a drive towards greater social justice. There is no greater force to reduce inequality than education, and particularly school and early years education. Equality of opportunity in this area is one of the most important forces which can help achieve that aim of greater economic equality in the long run.”

In her address Ms Constance spoke of the Scottish Government’s commitment to raising attainment in schools and said that now was a great time to be entering the teaching profession. She stressed that, “Raising attainment and closing the equity gap between the most and least deprived backgrounds is a priority for the government and you will play a key part in that.”

The Cabinet secretary also told the audience of students from both the University of Glasgow and the University of Strathclyde that, “You should never underestimate your role or the impact you will have on our children, their future and that of our country.”

After her speech Professor Robert Davis, Head of the School of Education introduced what proved to be a lively question and answer session. He then thanked the Cabinet Secretary, on behalf of the University, for delivering what had been a very insightful presentation.