The Principal and Vice Chancellor of the University of Glasgow, Professor Anton Muscatelli, is to Chair the Commission on Urban Economic Growth for the new Glasgow City Region. His appointment and that of Lord William Haughey as chair of the Glasgow and Clyde Valley Economic Leadership Board will be confirmed at the next meeting of the Cabinet for the £1.13billion City Deal for the Glasgow City Region on 20 January. 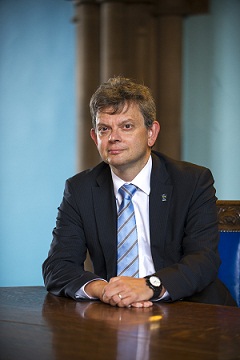 These associated bodies are being created to assist the Cabinet with the co-ordination and maximisation of wider economic development activity related to the City Deal.

The City Deal aims to fund major infrastructure projects, drive innovation and growth through the support of key sectors such as life sciences, and address challenges in the region’s labour market.  These projects will allow a programme of work which will greatly add to the value of the local economy over the next 20 years.

The UK and Scottish Governments will each give the City Region £500million in grant funding, and the local authorities will borrow a further £130million.

Councillor Gordon Matheson, Leader of Glasgow City Council, said: “Lord Haughey and Professor Muscatelli are highly accomplished and respected in their fields which are directly relevant to the role they will provide as part of City Deal governance.  They are also powerful supporters and advocates of Glasgow and our city-region.  I know they will make an enormous contribution to the delivery of this transformative economic project.”

Professor Anton Muscatelli, Principal and Vice-Chancellor, University of Glasgow will chair the Commission on Urban Economic Growth. He said, “This is a crucially important as well as a very exciting time for the Glasgow City region. In bringing together the expertise and innovation of business, universities and other stakeholders we can really help ensure that the future continues to be one of economic and social development and regional success. I am delighted to have been invited to Chair the Commission on Urban Economic Growth and look forward to working with colleagues to really deliver for the Glasgow City Region.”

Lord Haughey said: “The Glasgow and Clyde Valley City Deal has the potential to deliver outstanding economic growth through job creation across this region.  I am honoured and privileged to have been asked to play a part in overseeing the delivery of this major initiative.  As Chair of the new Glasgow and Clyde Valley Economic Leadership Board, I look forward to working with all stakeholders to attract high calibre individuals from all sectors of business to be part of the Board.”

Glasgow City Region is at the heart of the economy of Scotland.  The region has a population of 1.8million (34% of Scotland), clustered round a vibrant urban core with world class educational, recreational and business facilities; 35% of Scottish jobs, and 40% of the jobs in some of the key sectors such as Finance, Aerospace, Defence and Marine; 36% of Scottish GVA (£36billion in 2011); the only conurbation of scale in Scotland with the diversity of people and talent to quickly adapt to the challenges of the future; a strong track record of joint work and the ability to deliver investments of scale; and a clear vision for action – and the partnership with business and academia to make it happen.

The component parts of this City Deal agreement are:

An Infrastructure Fund -based on the proposal developed by the Clyde Valley Authorities (excluding East Dunbartonshire) for a programme of investments over 20 years valued at £1.13billion.

Funding for Labour Market Programmes -detailed discussions were held on labour market policy, with a view to introducing new ways of working to assist specific groups identified as suffering greater disadvantage in the labour market.

Funding for Innovation and Growth – Business Cases are being finalised for three projects which will support new business creation in Life Sciences across the region and a new facility which will accommodate young companies and help them grow.

The eight local authorities collaborate on strategic issues through the Clyde Valley Community Planning Partnership, which has as its vision a city region ideally positioned to meet the challenges of the next 20 years, becoming more outward-looking and better connected to European and global markets.

The characteristics of the City Region would include a strong growing core in Glasgow, but able to exploit growth opportunities across the region, reducing economic inequality, and a highly skilled and entrepreneurial workforce able to engage fully with the labour market.

A key aim is for the City Region to be seen as one of Europe’s leading destinations of choice for residents, businesses, visitors and investors.  In addition, the local authorities have been developing a more strategic approach to infrastructure planning and investment and have been working on the Clyde Valley Infrastructure Fund, which is at the heart of this City Deal.

Economic growth is expected to create an additional £20.7billion in tax revenue for the UK over the 20 year life of the fund.

The following bodies are being established to support the City Deal Cabinet in the Glasgow City Region:

1)         The Commission on Urban Economic Growth.  The Commission is described in the Deal document as the body which will undertake the five yearly reviews of progress in achieving the economic growth set out in the vision for the Glasgow City Region.  Its remit and methodology are subject to final agreement with the Scottish and UK Governments.  The broad principles of its structure have been agreed.

The focus of the new structure will reflect the themes of the City Deal - infrastructure, innovation and employability - and develop the existing work streams of the Glasgow Economic Leadership Board.  In addition, the new structure will also provide a focus on business growth and sustainability, promoting entrepreneurship, and link with the sustainability and smart cities agendas.

3)         The Regeneration and Economy Consultative Group.  In order to harness the energies of the wider public sector partners around the delivery of the City Deal, the Deal document describes the creation of this group which will bring together:

It is planned that the group is formed when the full details of the City Deal Implementation plan are agreed with Government and the first wave of investment projects are agreed.  A detailed remit and plan of work will be presented to a future meeting of the Cabinet.

4)         The Legal and Procurement Support Group. – Securing local economic benefits and impacts for communities is a critical part of the way in which the City Deal will be implemented.  The PMO will draw on the learning from the Glasgow 2014 Commonwealth Games in designing procurement and contracting approaches that maximise local benefits.  The PMO will establish a Procurement and Legal support group to assist the participating Authorities to implement best practice, and to gather performance information for future reporting.