Archaeologists and veterans to explore what lies beneath Waterloo Battlefield, 200 years on

An international team of battlefield experts, led by the University of Glasgow’s Dr Tony Pollard, will start work at farm buildings of Hougoumont in April 2015.

The research is being undertaken as part of Waterloo Uncovered, which is launching today and aims to transform our understanding of the battle that created modern Europe and ended the Napoleonic era.

Uniquely, the team will include British veterans, some wounded in recent campaigns, who will work alongside leading battlefield archaeologists and military historians. Together they hope to answer questions that remain unanswered 200 years after the battle. 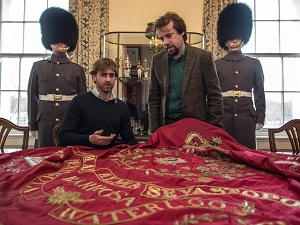 While the battle has been studied by generations of historians, little is known about the archaeological remains that exist under the surface of the battlefield.  There were tens of thousands of casualties in the battle and the locations of massed graves have never been identified and marked.  This will be the first time that the battlefield has been the subject of a large scale archaeological survey using the latest technology and practices developed by conflict archaeologists.

Dr Tony Pollard, Director of the Centre for Battlefield Archaeology at the University of Glasgow, will lead the archaeology.  Dr Pollard said: "History tells us who won the battle but understanding what happened has until now relied on first-hand accounts and reports of the battle that in some cases are either confusing or biased.  We hope archaeology can provide answers to many of the questions about Waterloo that remain unanswered. These include the location of graves, which from accounts appear to have been scattered across a wide area, but also details of the at times confused fighting at locations such as Hougoumont, and on a broader scale, the effectiveness of the strongpoints of Hougoumont and La Haye Sainte in blunting the force of the French attack on the Allied centre and right. As an archaeologist this is a once in a lifetime opportunity to explore such a famous battle, not least because the battlefield remains remarkably undisturbed 200 years later.”

Waterloo Uncovered is the brainchild of two Coldstream Guards officers, Major Charles Foinette, who currently serves with 1st Battalion Coldstream Guards, and Mark Evans, who suffered from PTSD following his experience in Afghanistan.

Project supporters include Waterloo 200, the official body recognised by the UK Government to support the commemoration of the battle in its bicentenary year, and the Coldstream Guards.  The Waterloo Uncovered team will also work closely with Project Hougoumont, which has funded and overseen the restoration of the surviving farm buildings at Hougoumont and the creation of a new visitor centre focused on that area of the battlefield. 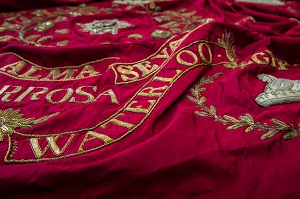 The project will also partner Operation Nightingale, an award winning, MoD backed initiative to rehabilitate veterans and provide life and vocational skills through archaeology.  Project Nightingale will oversee the participation of British veterans while working with Waterloo Uncovered.

Mark Evans, Project Co-ordinator of Waterloo Uncovered, said:“Having left the army through PTSD, and subsequently been taken as a veteran on Nightingale digs, I have experienced first-hand the benefits of archaeology and what it can do for the recovery process”.

Waterloo Uncovered is supported by the Service de l'archéologie-Direction extérieure du Brabant Wallon which regulates all archaeological activity on the battlefield.

Dominique Bosquet, Excavation Director, Service de l'archéologie-Direction extérieure du Brabant Wallon, said: “What I think makes Waterloo Uncovered truly special is that for the first time we have a regiment, in the form of the Coldstream Guards, supporting an initiative to explore its own history through the medium of archaeology.  The Coldstream Guards and veterans who will participate provide a living link to the battle.”

Nathalie du Parc, Présidente chez Intercommunale Bataille de Waterloo 1815 said: “We are delighted that Waterloo Uncovered is set to explore the battlefield in the bicentenary year of the battle.  We hope that this landmark project and its discoveries will add to our understanding of the battle and to the experience for visitors to the site for many years to come.”

Count Georges Jacobs de Hagen, Chairman of Project Hougoumont, Belgium, said: “It has long been a legend that bodies were buried on the battlefield on Waterloo where they fell. Having restored Hougoumont as a living memorial to the brave soldiers that fought and died to defend it, this current archaeological initiative by the Coldstream Guards, including wounded soldiers from current campaigns is both fitting and admirable.”

For further information on the project visit: www.waterloouncovered.com

Waterloo Uncovered is a groundbreaking archaeological project to investigate the battlefield of Waterloo. In April 2015, the battle’s bicentenary year, a team of top European archaeologists and British military veterans will begin survey work around the area of Hougoumont Farm. The project is a partnership between Operation Nightingale, the Service de l'archéologie-Direction extérieure du Brabant wallon, the Centre for Battlefield Archaeology, Glasgow University and the Human Identification Centre, Dundee University.  It is supported by Project Hougoumont, the Coldstream Guards, Waterloo200 and the MoD. Devised as a one-year project, the work carried out in 2015 has the potential to form the basis of a longer-term project if desired.

1.    Improve knowledge and understanding of the battle by adding new archaeological information to the existing record, testing new and existing theories, and presenting findings in an open and accessible fashion.

2.    Provide an opportunity for veterans to take part in a once-in-a-lifetime project. To use archaeology to assist personal development and injury recovery whilst learning vocational skills.  The project will also provide important training opportunities for archaeologists and, in particular, the next generation of conflict archaeologists.

3.    Promote international relations by understanding how Waterloo was fought by and affected almost every European nation. This multinational thinking will be taken into consideration at all stages of planning e.g. archaeology team selection.

4.    Commemorate those who fought and fell at the battle by explaining to the public why the battle was fought and what impact it had both then and today. Identifying the final resting places of soldiers from all nations, and marking them correctly and respectfully.

5.    Preserve the archaeology of the battle and enhance management of the cultural heritage by assessing the battlefield to identify and record areas in danger, then excavate, conserve and display as appropriate.

Waterloo Uncovered has a number of key supporters:

The Coldstream Guards has a historic interest in the battle and Hougoumont Farm in particular, where the regiment has provided funding to maintain and restore the farm for over a century.  The regiment will provide some administrative support as well as veterans to participate in the exploration.

Operation Nightingale (part of the Defence Archaeology Group) is an award winning, MoD backed, initiative to rehabilitate veterans and provide life and vocational skills through archaeology. They have extensive experience of running archaeological excavations with veterans and will take responsibility for veteran selection, management and any medical and special requirements.

Service de l'archéologie-Direction extérieure du Brabant wallon regulate and oversee all archaeological works in the region.  They have agreed not only to underwrite the necessary permits, but will be active participants in the project, providing valuable links to the local community and Belgian stakeholders.

The Centre for Battlefield Archaeology, Glasgow University, is a pioneer and world leader in the fields of battlefield and conflict archaeology and has carried out archaeological investigations on conflict sites ranging from the medieval to modern eras across the globe. The Centre will provide the project with essential expertise, not least through the provision of its Director, Dr Tony Pollard as lead archaeologist.

The Centre for Anatomy and Human Identification at the University of Dundee is one of the world's foremost institutions for the study and application of human anatomy, forensic human identification, forensic science, disaster victim on   Experts from the Centre will oversee the investigation of any graves encountered during the various archaeological surveys undertaken as part of Waterloo Uncovered.

Waterloo 200 is the official organisation overseeing the commemorations of the 200th anniversary of the battle of Waterloo.  Waterloo 200 recognises Waterloo Uncovered as making an important contribution to the Waterloo bicentenary commemorations.

Project Hougoumont Belgium is the organisation responsible in Belgium for fundraising for the restoration of the surviving buildings at Hougoumont, the farm complex which anchored Wellington's right flank during the battle..

The wider archaeological community will provide leading archaeologists from the UK, Belgium, France and Germany. The project provides an excellent opportunity for them to support veterans and work on a site of significant archaeological importance.