A researcher at the University of Glasgow has discovered the oldest surviving non-biblical manuscript from Scotland.

The find was made in the University of Glasgow’s Special Collections by Dr Kylie Murray, a British Academy Postdoctoral Fellow from the English Faculty and Balliol College, Oxford, currently at Glasgow on a Visiting Fellowship. 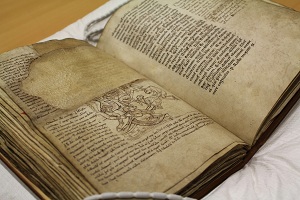 The manuscript is a twelfth-century copy of the ‘Consolation of Philosophy’ by Boethius, a statesman of the late Roman Empire. The ‘Consolation of Philosophy’, thought to have been written in 524 AD by Boethius while he was awaiting execution for a crime he did not commit,was Medieval Europe’s best known intellectual text, second in influence only to the Bible. It discusses free-will, fate, and the idea of the wheel of fortune in a meditation on how to cope with adversity and injustice.

Although the Boethius manuscript, which dates to c.1130-50, was known and had previously been catalogued, scholars had believed it to be English, with Durham being the most likely place of origin. However, closer inspection has revealed that the manuscript’s handwriting and illustrations do not match those of Durham, or other English books, from this period.

Dr Murray argues that instead the manuscript suggests a connection with the Scottish kingdom. Its unique illustrations more closely resemble the famous Kelso Charter, written at Kelso Abbey in 1159. This charter, which portrays an image of David I (1124-53) and Malcolm IV (1153-65), is the earliest illustrated documentary charter in the history of the British Isles. 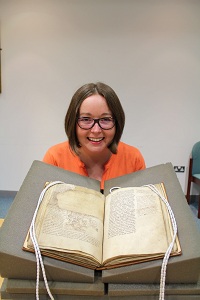 King David I of Scotland also forms a crucial link in placing the Boethius manuscript. The Glasgow manuscript contains a reference to ‘David, by grace of god king of Scots’, added alongside Boethius’s text by a subsequent reader. This comment is the only indication of provenance or location in the manuscript. It is also a formula commonly found in David I’s legal documents, or charters, which conferred royal authority or decrees on a range of institutions and individuals. Many of the scribes producing these charters for David I came from Kelso Abbey, and Kelso was also David’s preferred monastery.

Although charter culture in twelfth-century Scotland is well researched, Scotland’s literary culture in this period has been deemed lost or non-existent because of a lack of surviving evidence. Literary scholars of Scotland have instead focused on the fifteenth and sixteenth centuries.

‌Identifying the manuscript as a product of David I’s Scottish kingdom means that Boethius was being read in Scotland 300 years earlier than previously thought. Dr Murray, who is conducting a British Academy Post-Doctoral Fellowship project on Boethius’s ‘Consolation of Philosophy’ in Scotland, believes that this is proof that intellectual and literary cultures were flourishing in Scotland at a far earlier date than has been realised. 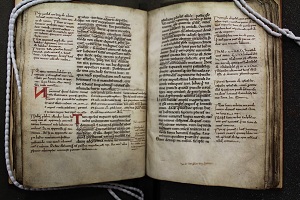 Dr Murray said: “Glasgow’s Boethius manuscript allows a fresh understanding of Scotland’s early responses to key intellectual works in the Middle Ages, and provides a snapshot of how Scotland’s literary culture as we now know it first began to emerge and develop.

Jeremy Smith, Professor of English Philology and Head of the School of Critical Studies at the University of Glasgow, said: "Dr Murray -- one of the most exciting early-career researchers currently working in her field -- is to be congratulated most warmly on this fantastic discovery, which opens up a whole new chapter in Scottish cultural history.  The importance of Boethius's book for medieval and early modern studies cannot be overestimated.  We are honoured that Dr Murray's tenure as Newlands fellow, attached to our School, has been marked in this way."'