A First World War centenary paving stone will today (25 September 2014) be unveiled at the University of Glasgow to honour the city’s first recipient of the Victoria Cross.

Captain Harry Sherwood Ranken was the first Glasgow-born man to receive the medal for his valour in France. It is the highest award for gallantry that a British and Commonwealth serviceman can achieve. 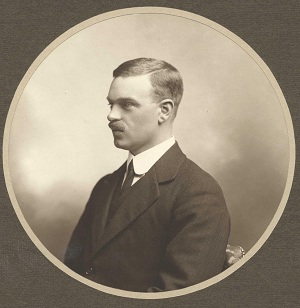 The event also marks the start of the University of Glasgow’s four year Great War Project, which tells the story of more than 4,500 staff and students who served in the First World War.

The special service will be held at the University’s Memorial Chapel at 10.45 am and coincides with the centenary of Ranken’s death. Glasgow’s Lord Provost Sadie Docherty will unveil the VC stone which will be permanently housed there.

Professor John Briggs, Clerk of Senate and Vice-Principal of the University of Glasgow, said: “The story of Captain Harry Ranken is both inspiring and profoundly moving. I am humbled and deeply honoured to commemorate his life in this way, one hundred years after his death.

“Over the course of the First World War, the University of Glasgow lost 761 members of its community. A quarter of those who served were medical personnel. I am therefore also honoured to be able to launch our Great War Project to tell the story of those from the University who served in the Great War.”

Captain Ranken received his Victoria Cross for an act of bravery which took place on September 1914. On 19 and 20 September 1914 at Haute-Avesnes, France, Captain Ranken, a member of the Royal Army Medical Corps (RAMC), was severely wounded in the leg whilst attending to his patients on the battlefield under shrapnel and rifle fire.

He stopped the bleeding and bound it up, then continued to dress the wounds of his men, sacrificing his own chance of survival to attend to their needs.

When he finally permitted himself to be carried to the rear at Braisne, his wounds were too severe and he died on 25 September. For this act of heroism he was awarded the Victoria Cross which is now held at the Army Medical Service Museum in Aldershot.

The Lord Provost, Sadie Docherty, said: “Captain Harry Ranken was a soldier who put the needs of his men ahead of himself. It is that leadership and heroism that distinguished him as this city’s very first recipient of the Victoria Cross.

“It is a privilege to attend this service and acknowledge his courage. I am delighted that Captain Ranken is being honoured by his city on the 100th anniversary of his death. It is fitting that his heroism during the Great War, is being recognised and recorded, to resonate across this and future generations.”

Relatives of Captain Ranken will also attend the event being led by the Rev Stuart MacQuarrie, the University of Glasgow’s Chaplain. They were successfully traced just days before the special event by archivists from the Mitchell Library following an urgent appeal by the Lord Provost for family to get in touch. They are: David Enyon (68) (grand nephew), Mrs Betty Balfour (88) (niece) and Jennifer Watson.

David Eynon, the grandson of Ranken’s brother Alan Rain Ranken, said: “I feel very close to my great uncle and I am very proud. The Sherwood name has been carried by the first born through the family. My mother carried it and so do I and it will be passed along the generations. Every year I make a point of visiting the family grave in Irvine, as near to Armistice Day as I can, to remember my great uncle. He was quite a man.”

The decision to place the centenary paving stone for Captain Ranken at the University of Glasgow was taken after learning his parents had founded a University of Glasgow prize in their eldest son’s memory. It is still awarded annually to the candidate who obtains the highest number of marks in the professional examinations in Pathology.

Former university students who received the Harry Sherwood Ranken Prize, and a representative from the Royal Army Medical Corp will also attend the service.

Each of the 761 alumni and staff of the university who died in the war will have a white cross placed in the garden in their memory.

Lieutenant Robinson of 8th Field Ambulance wrote in his narrative for 23 September 1914: “It was on one of these days at Braisne that I came across that very gallant fellow Captain Rankin, RAMC. When I saw him he was lying on a stretcher on Braisne Station platform; he was smoking a cigarette and talking with animation. He had recently had his leg amputated somewhere above the knee, but had said he was in no pain and was quite comfortable and well. We were horribly shocked to hear a day or two later that he had died suddenly of Embolism; but he had already