Prevention is better than cure: and no more so when it comes to injuries to racehorses, which can easily end a champion’s career.

Despite apparent advances in stem cell techniques to repair damaged tendons in horses, trainers and owners say they would like more help preventing costly injuries in the first place and this is where researchers should focus their attention. 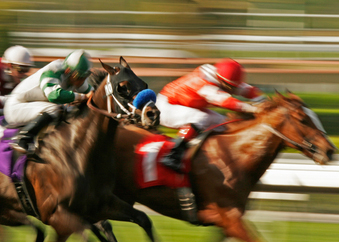 The view emerged from a meeting organised by researchers at the University of Glasgow to discuss research into superficial digital flexor tendon injuries. These affect up to 30% of Thoroughbred racehorses and are both exercise- and age-related. This is also known as “bowed” tendon.

Tendon injuries are slow-healing and can easily recur, effectively ending the racing career of many horses.

While much research in this field is now focusing on stem cell therapy, prevention or early-detection of tendon injuries to horses is probably much preferred by racehorse owners themselves.

Professor Janet Patterson-Kane, professor of veterinary pathology, said: “What researchers are focusing on is not necessarily what people want. We thought they would be interested in stem-cell therapy and suchlike, but they’d rather not have to spend large amounts of money on treatments in the first place.”

The difficulty lies in early diagnosis of superficial digital flexor tendon injury, because while there are various degrees of damage before it ruptures, and before the horse is even visibly lame, it is very difficult to detect. Once a tendon weakens to the point that it ruptures, it will never be the same again. There currently is no simple test that can be carried out to find this damage in its earliest stages.

Prof Patterson-Kane said: “Prevention, however, could make a bigger difference – for example, there have been success stories in general injury prevention through paying attention to things like race surfaces and animal welfare. The industry still has to ask itself if a 30% tendon injury rate is acceptable “

Lincolnshire-based racehorse trainer and vet James Given, who contributed his views to the study, said: “The superficial digital flexor tendon is a fairly common injury – we probably see a couple of horses here every year or so with it.

“Some horses do come back from it to race again, but I think most trainers feel that once an injury has occurred it’s certainly a career-limiting event, if not career-ending. The problem with this type of injury is it’s a binary condition – either it’s injured or it’s not. It can’t be injured a little bit.

“The costs of the injury vary, depending on what treatment you go for. Stem cell treatment is very expensive or you can rest the horse, but there are the costs of stabling and exercising. Many horses here are in training for racing, so if they are not racing there is a cost to the owner too.

“There are many treatments used for this condition but no single one seems to be better than another. If scientists were able to identify a biomarker within a blood sample that indicated the tendon was breaking down it would allow early, preventative intervention. It would be very helpful.”

Finding a way to obtain early warning of tendon damage would be of great benefit to human athletes too, say the researchers.

Prof Patterson-Kane said: “The horse’s superficial digital flexor tendon is the equivalent of the Achilles tendon in humans – and is an accepted model for that.

“Achilles tendon injuries for athletes are increasingly common and once injured, they reinjure very easily, putting an end to many careers. Nevertheless, the focus of research remains on treatment rather than prevention because it is seen as easier. But it doesn’t mean to say that’s what we should be concentrating on.” The study authors suggested research to further identify factors involved in tendon injury, links between training regimens early in life and subsequent performance, and development of imaging and blood testing strategies for the detection of early signs of injury should be pursued. The study, funded by the Biotechnology and Biological Sciences Research Council, was published in the Equine Veterinary Journal.