The Football Fans in Training (FFIT) initiative designed by the University of Glasgow won the Sport award category at the Glasgow Community Champion Awards – North West ceremony in Maryhill. 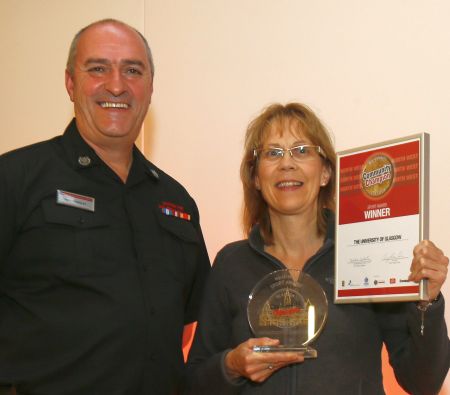 The initiative is targeted at overweight men aged 35-65, who are traditionally reluctant to join existing weight-loss programmes, and is delivered in partnership with Scottish Professional Football League clubs and the SPFL Trust, supported by the Scottish Government.

Participants attend 12 weekly group sessions at the SPFL club they support where they are encouraged to look at their diet and levels of exercise.

The programme has seen participants benefit from sustained weight-loss and has been copied in various other parts of the world.

Dr Cindy Gray, of the Institute of Health and Wellbeing who collected the award, said: “It’s great to receive this award for an initiative that has been so successful in helping men in the city and beyond to achieve sustained weight-loss and improved health.”

The project will compete in the grand final of the Glasgow Community Champion Awards, held in the City Chambers in December.