The University of Glasgow will be awarding seven Honorary Degrees as part of its Winter Graduation celebrations. 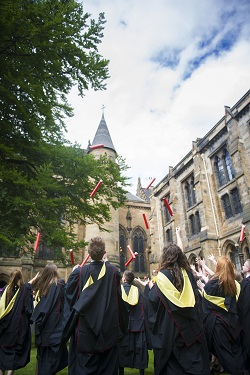 An alumnus of the University of Glasgow, the Very Reverend Lorna Hood is Honorary Chaplain to the Queen and served as Moderator of the General Assembly of the Church of Scotland in 2012-13.

Karyn McCluskey established the Scottish Violence Reduction Unit (VRU) within Strathclyde Police with colleague John Carnochan in 2005. The VRU was charged with formulating and implementing a strategy to significantly reduce the rate of violence in the Strathclyde area.

The University of Glasgow will also award Doctor of Science (DSc) to two renowned scientists: Professor Parveen Jane Kumar, Consultant Gastroenterologist at the London Clinic and Professor of Medicine and Education at the Royal Hospital of St Bartholomew, and Robin McLaren, Geomatical scientist and founder of management and ICT company, Know Edge.

The Rt Hon Lord Patrick Stewart Hodge, a Scottish lawyer and Justice of the Supreme Court of the United Kingdom, will receive the title of Doctor of Laws (LLD).

Graeme Waddell, Director and Chairman of Energen Biogas and former Head of Operations of Rolls Royce Aero Repair, will be awarded Doctor of Engineering (DEng).

Paul Tudor Jones II, founder of Tudor Investment Corporation, will receive the award of Doctor of the University (DUniv).

Professor John Briggs, Clerk of Senate and Vice-Principal of the University of Glasgow, said: “It a privilege to be able to honour seven figures, all of whom are recognised as leaders both within their own fields of expertise, and beyond.”

All seven will receive their Honorary Degrees at ceremonies which will take place in the University of Glasgow’s Bute Hall between 25th November and 5th December.

Dates and times for Honorary Graduands in the Winter Graduation period are listed below:

Moderator of the General Assembly of the Church of Scotland