Sources substantiate claim that Doctor Who may have graduated from University

New research by archivists supports claims made by Doctor Who that the celebrated Time Lord may at some point have received a Doctorate from the University of Glasgow.

The question of how and when the Doctor was awarded his Doctorate has eluded Whovians for decades. Given his adventures travelling through time and space, keeping the world safe from evil monsters, it is perhaps not surprising that the Doctor’s matriculation record is less than straightforward.

Revelations made in the episode ‘Death in Heaven’, broadcast on Saturday 8 November seemed to answer that question when the Doctor’s companion Clara Oswald referred to the degree he was awarded by the University of Glasgow. 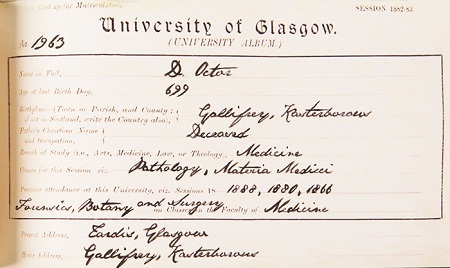 The Doctor has made several inconsistent statements on the subject over the years, at one point claiming to have studied under renowned physician Joseph Lister in 1888. Whilst at the University of Glasgow, Lister pioneered a revolutionary system of antiseptic surgery.

Head of the University of Glasgow’s Archives Services, Lesley Richmond has developed her own theory on the matter, saying: “There are a few problems with the Doctor’s Glasgow claims. Lister wasn’t here in the 1880s. And, when you look at the different dates the Doctor says he was here – it doesn’t add up.

“One of my theories is that he came to consult with some of the greatest scientific minds of the time, because he was developing the sonic screwdriver. Now, who better to assist than renowned physicist and engineer Lord Kelvin?”

The sonic screwdriver is one of the Doctor’s sophisticated gadgets. It allows him to unlock anything and remotely control other devices. Lord Kelvin was Professor of Natural Philosophy from 1846–1899, which means the Doctor could have taken his classes in advanced mathematical physics as well as used his electrical engineering laboratory to develop the screwdriver.

In the episode broadcast on Saturday 8 November, while pretending to be the Doctor in an effort to save herself from an army of Cybermen, one of the planet’s deadliest enemies, Clara Oswald said: “I don’t even really have a doctorate. Well Glasgow University, but then I accidentally graduated in the wrong century.”

Although her statement doesn’t fully solve the mystery of what he studied and when, it confirmed the claim that he is a Glasgow graduate.

In 1967, the Second Doctor (played by Patrick Troughton), in the Moonbase series of Doctor Who, said he had graduated in medicine at Glasgow in ‘1888, I think...Lister’.

Professor of Surgery Joseph Lister developed a revolutionary system of antiseptic surgery while at the University from 1860 to 1869. But this was over 15 years before the Doctor claims to have been here.

The Fourth Doctor (played by Tom Baker) only muddies the water further, including Lister in his CV but dating the degree to 1880.

‌And the Fifth Doctor (Peter Davidson) told American college student Peri Brown that he could be a medic in the American Civil War because he had a degree from Glasgow.

The current writer and producer behind the series, Steven Moffat (MA 1983), is a Glasgow graduate. An enthusiastic fan of the show since childhood, Steven became head writer and executive producer in 2010 after several years writing for the show. It’s Steven who has been attributed to the recent rise in success of Doctor Who.

Did the Doctor study at Glasgow? While Saturday’s revelations don’t tell us exactly what he studied, it does confirm that the Doctor took a flexible approach to his studies. Being over two thousand years old, spending his life jumping between civilisations to save the world, this makes sense. If he says he got a medical degree at Glasgow, perhaps we have to just take him at his word.