Whithorn in Galloway has been known for centuries as a sacred place. To some it is as important to Scottish Christianity as the island of Iona. Now, thanks to a new report the routes and paths taken by medieval pilgrims to Whithorn have been rediscovered and mapped out.

The study is based on research undertaken by Catriona Macmillan, a research associate with the University of Glasgow’s Solway Centre in Dumfries, working for the Whithorn Trust through Third Sector Internships Scotland. Using Ordinance Survey references, sites that would have been popular for travellers during the early middle ages, right up until the Scottish Reformation of 1560 when pilgrimage became a punishable offence, have been traced. Included within the report are the locations of abbeys and chapels that offered hospitality, holy wells and other places of significance. 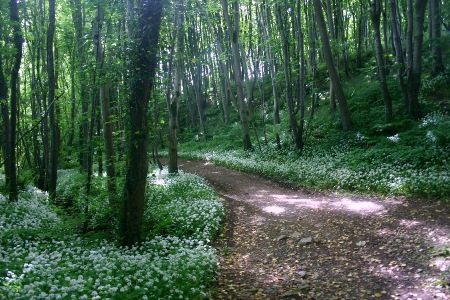 Dr Valentina Bold, Director of the Solway Centre at the University of Glasgow said “We are delighted to have been able to work with the Whithorn Trust to promote better knowledge of one of Scotland’s most significant early Christian sites and, arguably, in St Ninian, Scotland’s most significant saint.  His Miracles show Ninian as very much part of the Whithorn community, anchored in the distinctively rich landscape and culture of Galloway and Scotland.”

Reverend Alex Currie, Chair of the Whithorn Trust said “The Publication of Catriona’s work comes at a very important moment in time for the Whithorn Trust and indeed, the wider community of Whithorn itself. Ever conscious of the importance of our past, we long to tell our ‘story’ in the present. It is to be hoped that this new work will encourage today’s modern pilgrims to beat a once well-worn path to Whithorn again.”

Catriona Macmillan, the author said "This has been a fascinating project to work on. The picturesque roads to Whithorn are steeped in history and legend. I hope this report will encourage pilgrims, ramblers and history enthusiasts, be they local or from further afield, to tread these paths and discover some of the region's most intriguing ancient sites."