Infection specialists have uncovered new evidence about how the human body’s immune system responds to invading germs – a finding which could help combat hospital-acquired infections in future.

The University of Glasgow team has been focusing on a particular pathogen – called Pseudomonas aeruginosa – which is the main cause of hospital-acquired pneumonia and has become increasingly resistant to antibiotics. 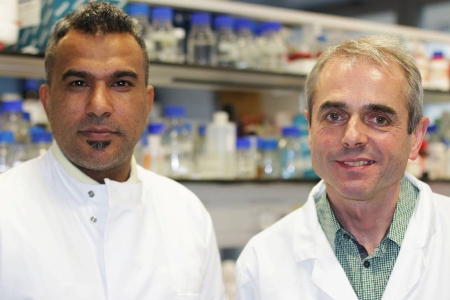 Critically-ill patients who are ventilated in intensive-care units are particularly vulnerable to this infection.

Now, however, a team led by Tom Evans, Professor of Molecular Microbiology, and Iraqi PhD researcher Majid Jabir, of the University’s Institute of Infection, Immunity and Inflammation, have made an important breakthrough in understanding how the body’s defensive response to infection works.

Their findings, which have been published in the U.S. journal Cell Host and Microbe, could potentially lead to new treatments.

Professor Evans explained: “Infection triggers a number of fundamental protective responses. One of these is the production of proteins, called ‘cytokines’, that help co-ordinate our immune system to combat invading pathogens.”

His team made what he describes as a “surprise finding” – that the activation system for producing certain cytokines in response to infection actually destroyed another key signalling protein within immune cells.

“This leads to down-regulation of a number of other cell processes,” added Mr Jabir, who is the lead author for the paper, (Caspase-1 Cleavage of the TLR Adaptor TRIF Inhibits Autophagy and b-Interferon Production during Pseudomonas aeruginosa Infection).

The discovery of cross-talk between different elements of the defensive response to infection could potentially be exploited to develop new therapies against bacterial diseases. “This is a particularly pressing need given the rise in antibiotic resistance,” added Mr Jabir.