Pakistani student is bowling for gold in Glasgow

It has only been three years since he took up the sport but student Muhammad Shahzad will soon be competing in lawn bowling in the Commonwealth Games.

The University of Glasgow PhD student has been included in the Pakistan squad where he hopes to inspire children in his village back home by winning a medal. 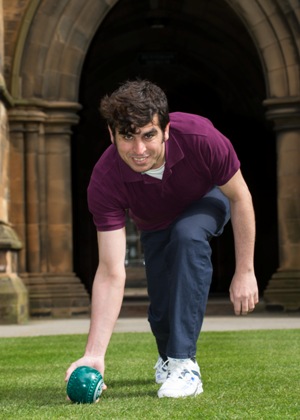 It is the first time Pakistan has competed in lawn bowls and Muhammad is one of four of his countrymen taking part in the competition.

Growing up in Kalu Khan, a small village in Swab District in the rural highlands of Pakistan near the border with Afghanistan, Muhammad did not have access to sports facilities but a childhood game, locally known as Pitoo Garam, that involved trying to hit a pile of rubble with a small ball did help equip him with the necessary good aim required in bowls.

After arriving in Scotland in 2010 to study PhD in biochemistry (human nutrition), in early 2011 he decided to try his hand at bowling during an impromptu visit to an open day at Willowbank Bowling Club in Dowanside Road.

“My first shot was right on target,” said Muhammad. His very first throw impressed the members and he has been honing his skills ever since.

When he discovered that Pakistan did not have a representative in the lawn bowling competition he wrote to the country’s Olympic Committee to ask to be considered. After a trial was arranged he received the nod to go to the Commonwealth Games.

Muhammad said: “I want to inspire youth of my country, to show that they can also go to University, to achieve their ambitions.

“Nowadays, Pakistan is in the limelight for bad news. We do not have much to celebrate and all I want is to give people something to cheer about.

Muhammad is now working with trainer David McWilliams in preparation for the event and friends from university have set up a Facebook page to track his journey from the training ground to the competitive arena in Kelvingrove Park, overlooked by his university.

It has been a long and exciting journey for Muhammad from his early days in the village. He said: “I was born to a poor family. My father is a farmer and was the sole bread winner for whole family. Though my parents are not educated, but they put in every effort to educate me.

“It was very hard for my parents to afford my education but I always was a brilliant student. Throughout my academic career, I always received talent scholarships from the government, ranging from as low as 250 rupees in fifth grade to 10 million rupees for my PhD studies in Glasgow.

“I was good at games too. I use to play cricket but mostly stuck to local games that did not involve any cost, require special equipment or playground facilities.

“Throughout my life, I struggle every day to achieve the highest possible positions in academia and always act as a source of inspiration for the youngsters of my village.

“Being from a poor and deprived area, all I want is to give hope to the poor kids and youngsters like me. My participation in the games is going be a historic moment for a lot of people backs home especially those who want to be best in both sports and academia.

“It is good for the game of bowls too. I am taking this game to a huge crowd so although this is just the start, who knows, may be in the next Commonwealth Games, lawn bowling athletes from Pakistan will be among the favourites for the gold medal.

“I am very excited and motivated to represent Pakistan: it’s an honour and big responsibility as well. My focus is now to give my best and make the people proud.

“I’m really grateful to Syed Arif Hassan, president of the Pakistan National Olympics Committee and my colleagues, especially Leighann Sherry for their encouragement and support.”

The lawn bowls competition will last from 24 July to 1 August.