New research into smouldering wildfires in the UK has found that they could be a contributor to climate change.

A team from the University of Glasgow’s School of Interdisciplinary Studies, studied an area in the Scottish Highlands that had a peat fire which lasted for longer than a month.  The wildfires kill all vegetation and effectively sterilise the area. 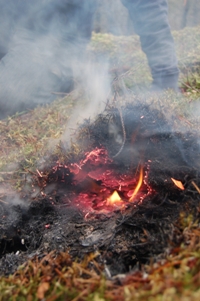 The Herald: Peat wildfires are linked to climate change

Wildfires can have impacts that last decades if not centuries. Peat fires, such as the one in this study can also release significant amounts of stored carbon.  Based on their measurements, they estimated that in total, the smouldering wildfire burnt between 0.1% and 0.3% of the estimated total amount of carbon sequestered annually by UK peatlands.  This means that even small events of this nature can release significant quantities of carbon.

Many countries have pledged to reduce carbon emissions by 2050.  However, current emission estimates, for example in the UK, do not take into account those from peatlands.  The large number of wildfires in Spring 2011 only adds to increasing concern about potential feedbacks between climate, fire frequency, fire severity and carbon fluxes from peatlands.  Additionally, there is little evidence of the long and short term effects of wildfires on carbon emissions from peatlands despite the global importance of fire in these systems.

Matt Davies, Lecturer in Environmental Stewardship,said “Smouldering peat fires are difficult to detect due to their low temperature and low heat release and the fact that tree canopies remain intact for months afterwards.  Our case study is the first of its kind in the UK and shows that even small areas of peat fires can release significant levels of carbon into the atmosphere.

“If similar smouldering fires are underreported in other temperate, forest and tropical peatland regions then emissions from peatland burning may well be a substantially greater issue than currently assumed.”

Peat consumption and carbon loss due to smouldering wildfire in a temperate peatland is available at http://www.sciencedirect.com/science/article/pii/S0378112713005094