The Principal has been confirmed as the new Honorary President of the David Hume Institute and will take up the post from 1 January 2014. He will follow on from Lord David Steel KT KBE PC who was President from 2010.
Professor Anton Muscatelli 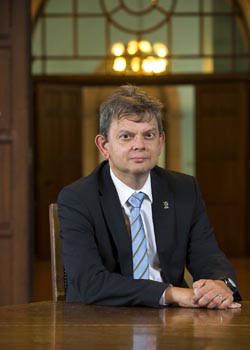 In announcing the new appointment Professor Hector MacQueen, Chair of the DHI Trustees stated: "The Trustees and I are delighted that our invitation to Professor Muscatelli to become our next Honorary President has been accepted. Professor Muscatelli continues our long-established tradition in being an economist of great distinction as well as one of the most prominent figures in present Scottish public life. We look forward to benefiting from his intellectual guidance as well as his vast experience in the public arena.”

In accepting the position Professor Anton Muscatelli said: ‘I am extremely honoured to be appointed as Honorary President of the David Hume Institute. Throughout its 28 year history, the Institute has stimulated informative and timely debate in all aspects of public policy in Scotland, social, legal and economic. As an economist I am delighted to be following in the footsteps of so many distinguished Honorary Presidents and Vice-Presidents in my academic area who have contributed greatly to public debate through the Institute.”