Sir Alex Ferguson, a veteran of countless battles on the football pitch turned his attention to the fight against cancer on a visit to the University of Glasgow today.

The former Manchester United manager acknowledged a generous donation of £1m towards the next phase of the The Beatson Pebble Appeal by his friend Malcolm Howat through The Howat Foundation.

The extremely generous donation is in addition to the previous support given by The Foundation to cancer research at the University of Glasgow, totalling £1.5m. 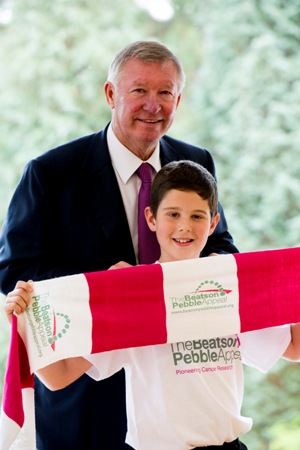 The initial phase of the appeal raised £10 million from 3,500 public donations for the construction of the Beatson Translational Cancer Research Centre.

The Appeal will now focus on providing further funding to attract world-leading scientists and provide them with the most advanced equipment, under the banner – ‘pioneering cancer research’.

With scientists and equipment now moving into the new Centre, Sir Alex was given a tour of the building and told about the work of cancer research scientists in Glasgow.

Sir Alex said: “It is an honour to visit this new research facility that will help in the fight against cancer which was funded by generous donations from many people. I am delighted The Howat Foundation has kicked-off the next stage of fundraising with such a generous gift.

“For too long Glasgow has been the cancer capital of Europe, and like many people over the years I have seen family and friends afflicted by the disease. I hope that investment in research facilities like this will help us beat cancer and improve the health of the people of Glasgow, Scotland and beyond, so I encourage people to continue supporting the Beatson Pebble Appeal.”

During his visit to the Centre, Sir Alex Ferguson was also presented with an honorary degree from the University of Glasgow in recognition of his major contribution to sport.

Professor Jeff Evans, Director of the Institute of Cancer Sciences at the University of Glasgow, said: “We’re very grateful for this donation from the Howat Foundation; as a scientist there is nowhere in the world better to work on cancer research than Glasgow.

“We have a really strong research community here with expertise spanning basic cancer biology, drug discovery, translational medicine, through to clinical trials – and all supported by outstanding facilities and technologies, with a true spirit of partnership and collaboration.

“The provision of up-to-date facilities and equipment is vital to attracting world-class cancer research scientists from all over the world and the Beatson Pebble Appeal will continue to play a vital role in helping us to do that.” 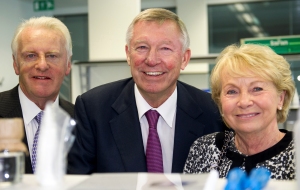 The new Centre will reduce the time taken to convert basic cancer research into real improvements in treatments for patients. It focuses on tumour types including pancreatic, colon, prostate, ovarian, brain cancers, and chronic myeloid leukaemia, and those where further investment is required based on opportunity and need, especially lung cancer.

Further investment will provide a platform of technical expertise and technological capabilities to support researchers across all tumour types to develop programmes aimed at delivering new therapies.

The work of the new Centre complements the existing facilities: The Cancer Research UK Beatson Institute at Garscube and The Beatson West of Scotland Cancer Centre at Gartnavel, where patients receive treatment. It is the only translational research facility dedicated to cancer in Scotland and will bring significant benefits to patients here in Scotland and beyond.

For information on how to donate to The Beatson Pebble Appeal click on the weblink below.

Cancer research in Glasgow
Over the past 10 years, cancer research scientists in Glasgow have made significant breakthroughs in the fight against cancer. These include:
• understanding the mechanisms that control survival of cancer cells
• Identifying some of the process by which cancer cells invade and spread, and how these might be exploited in the clinic
• Developing ways to increase the sensitivity of cancer cells to chemotherapy drugs and radiotherapy
• Developing clinical trials of new therapies leading to better treatments for patients

Since Sir George Thomas Beatson pioneered cancer treatments in the city in the 19th Century, Glasgow has continued to develop groundbreaking scientific research into the 21st Century. As cancer science in Glasgow expands with the opening of the TCRC, our ambitions only continue to grow.

The Howat Foundation has been long a standing supporter of Cancer research in Glasgow. It has supported leukaemia research through the work of Professor Tessa Holyoake, Professor of Experimental Haematology and Director of the Paul O’Gorman Leukaemia Research Centre. In addition, The foundation has funded the Howat Foundation Floor of the Beatson Translational Reserch Centre, which Sir Alex will visit on 12 September and it has supported the establishment of the post of Director of Translational Cancer Research which is held by Professor Andrew Biankin, who has recently arrived in Glasgow from the Garvan Institute of Medical Research in Sydney.

Thanks to our donors
More than 3000 generous donors have contributed towards the Beatson Pebble Appeal so far. Many of whom will be present on 12 September. Thanks to their support, we are now in a position to develop cancer research even further in the West of Scotland.