New blood: thalassaemia patients could be first to benefit from research

Scientists leading a pioneering study that aims to use stem cells to create a limitless supply of blood are hoping to start trials by 2016.

Thalassaemia patients could be amongst the first people to benefit from trials of lab-produced red blood cells which, if successful, could end the need for human donors.

Over the last four years the researchers have been working out how to make embryonic stem cells turn into red blood cells that could be mass produced.

The team have received funding from the Wellcome Trust and Scottish Funding Council (SFC) and both SNBTS and NHSBT contribute research staff and costs as part of their strategic R&D programmes. 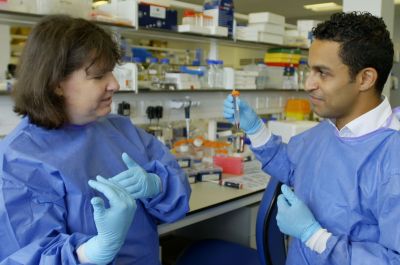 Dr Jo Mountford, an experimental haematolgist at the Institute of Cardiovascular and Medical Sciences at the University of Glasgow, is leading the basic science of the project, and is hopeful of a trial start date in late 2016.

She said: “There are many hurdles to overcome in the process of turning a stem cell into a useful red blood cell, and even more challenges we face in trying to ramp-up production to an industrial scale.

“We must first make the stem cells become a mesoderm – one of the body layers that makes things like muscle, bone and blood – and then get it to turn into blood cells. Then we have to make it develop into a red blood cell specifically and finally make it eject its nuclei and mature properly.

“Every single bag of transfused blood has about two trillion red blood cells in it. It’s a ludicrously high number to make in the lab. We use two million of those bags every year in the UK alone. Ensuring that any industrially produced blood can be made economically viable is quite a task.”

Blood is essential for hospital operations and for patients with a variety of conditions that require regular transfusions; but obtaining blood relies on the goodwill of individual donors. With just four percent of the eligible UK population donating blood regularly, blood stocks often operate at low levels.

Being able to mass produce red blood cells in the laboratory would overcome supply problems, particularly in those parts of the world where donated blood is not readily available, reduce the risk of transfusion transmitted infections and dispense with the need to match blood types.

So far the scientists have been able to turn stem cells into red blood cells and are focusing on creating the right type, O-negative, that can be used in anyone, and ensuring the cells are sufficiently mature. Roslin Cells and the SNBTS have received a manufacturing licence from the Government that will allow them to produce cells en masse, at clinical quality, when they are ready. This facility at the Scottish Centre for Regenerative Medicine (SCRM) is one of very few in Europe that have the capacity to produce cells at such a high standard.

Once the technique is perfected, the team will have to test the cells in humans to ensure their safety and efficacy.

Dr Mountford said: “We hope to begin human trials by the end of 2016 and believe thalassaemia patients would be a good group of people to participate in an early trial.”

Thalassaemia is a disease which affects the body’s ability to make red blood cells –resulting in the need for frequent blood transfusion. However, as a result of all these blood donations, they receive a huge dose of iron which if untreated damages organs and can be life-limiting or even fatal.

If these patients were able to receive red blood cells without the iron, it would drastically improve their treatment routine and health outcomes. Thalassaemia mostly affects people of Middle Eastern and Asian ethnicity.

Dr Mountford said: “When patients receive blood donations from individuals, the blood that goes into their body will contain some cells that are four hours old and some that are 100 days old.

“If we can use lab-grown cells, they would all be the same age and this may reduce the number of transfusions required and consequently could reduce the iron over-load and associated side-effects.

“We will need additional investment, beyond academic funding schemes, to get to the stage where we can manufacture sufficient blood for large clinical trials and will be seeking a suitable partner or investors to assist with such trials.”

For more information contact Stuart Forsyth in the Media Relations Office at the University of Glasgow on +44 (0) 141 330 4831 or stuart.forsyth@glasgow.ac.uk