The project was carried out jointly between University of Strathclyde, Imperial College London, University of Glasgow and the National Physical Laboratory. The results have been published in the journal Nature Nanotechnology, where it is featured on the front cover. 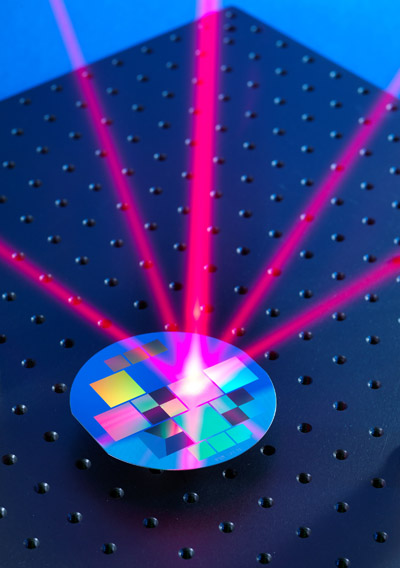 Many of the most accurate measurement devices, including atomic clocks, work by observing how atoms transfer between individual quantum states. The highest precision is obtained with long observation times, often using slow-moving ultracold atoms prepared in a large apparatus.

Dr Aidan Arnold, a Lecturer in Strathclyde’s Department of Physics said: "The longer the transition of atoms can be observed, the more precisely they can be measured. It is possible to shine laser light on atoms to slow them down using the Doppler effect. We can now do this in a really small device."

The researchers have developed technology that is far more compact than previous setups but can still cool and trap large numbers of atoms for use in portable devices. They patterned the surface of a semiconductor chip to form a diffraction grating, splitting a laser into many beams that cool the atoms.

Portable clocks, magnetometers and accelerometers have wide-ranging applications, including navigation on earth and in space, telecomunications, geological exploration, and medical imaging.

Dr Alastair Sinclair, Principal Scientist at the National Physical Laboratory said: "The miniaturisation of atomic sensors using these optical gratings can make an important contribution to metrology and high-precision measurement."

Professor Charles Ironside of the University of Glasgow's School of Engineering said: "The specialised optical diffraction gratings were co-designed by the groups in the collaboration and some of them were microfabricated in the James Watt Nanofabrication Centre at the University of Glasgow – the work is a good example of how a team of physicists and engineers can collaborate to produce cutting edge technology."