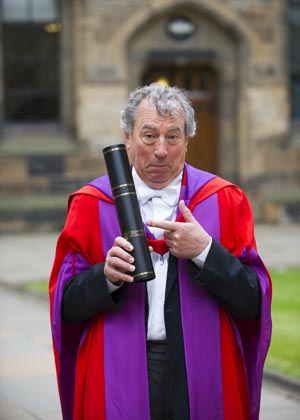 Author, actor and film director Terry Jones has been awarded an Honorary Doctorate by the University of Glasgow, at a ceremony on Friday 21 June.

In evening Terry also presented a lecture at the University of Glasgow entitled ‘Chaucer in the 21st Century’.

The former ‘Monty Python’s Flying Circus’ star received a Doctorate of Letters (DLitt) for his contribution towards film and television and for his academic research around medieval history and literature.

Terry’s lecture presents his own research findings which address the images of the Canterbury pilgrims that appear in the Ellesmere manuscript of Chaucer's ‘Canterbury Tales’. Focusing in particular on the knight, the monk and the friar, Terry will argue that these images were deliberately censored and will speculate on some of the motives and consequences for this.

Terry Jones said: “I am proud to be awarded the title of Doctor of Letters from the University of Glasgow and would like to offer my thanks for the consideration.”

Terry has achieved in so many fields what more than a dozen might reasonably expect to do in a lifetime: he is an academic, screenwriter, actor, film director, author, political commentator and comedian. He possesses the gift of making scholarship exciting and, with great enthusiasm, he opens medieval studies to a broad audience through his books, TV programmes and films. Above all, he's taught us all to 'only look on the bright side of life!'”

As a film director Terry co-directed (with Terry Gilliam) ‘Monty Python and the Holy Grail’, and directed himself co-wrote and starred in ‘The Life of Brian’, ‘The Meaning of Life’, ‘Erik the Viking’ and ‘The Wind in the Willows’. He directed ‘Personal Services’ and he also wrote the screenplay for Jim Henson’s ‘Labyrinth’.

The full list of Honorary Degrees presented in 2013 are listed below.

On the 12 June Honorayr Degrees were awarded as follows:

The following Honorary Degrees awarded at other ceremonies throughout June:

For more information please contact Nick Wade ini the University of Glasgow's Media Relations Office on 01413307126 or on nick.wade@glasgow.ac.uk.