A Scottish researcher has unearthed seven long lost manuscripts, including correspondence between Robert Burns and his close friends, which throw significant new light on the life and work of the poet.

The manuscripts are believed among some of the most important findings concerning Burns in recent years, and this research offers academics and scholars new resources through which to study his life and works.

Full research findings will be presented on 12 January at the University of Glasgow Burns Conference 2013. 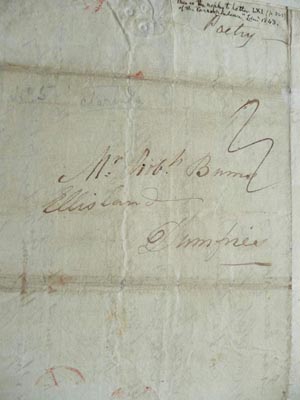 The finds include three holograph manuscripts written by Burns, three letters to the Bard, and one letter from Burns’s own dear `Clarinda’ to his physician, Dr William Maxwell.

Although some of these ‘detached’ manuscripts have been previously published, the original copies were lost for up to 200 years, until their re-discovery in 2010. They have now been privately sold to a collector.

Chris Rollie, the researcher who discovered and identified the lost manuscripts, said:”I realized very quickly that the material I was looking at was original and felt that some of it might be unpublished.  Careful research revealed that, whilst some of the material had been previously published, it was long lost and some material was indeed new to Burns scholarship. I feel very privileged to have discovered these manuscripts and look forward to sharing their contents at the conference.”

Professor Gerry Carruthers, Co-Director of the University of Glasgow’s Centre for Robert Burns Studies, which is hosting the conference, said: “'The finding of the Clarinda letter in full is very timely as we move towards a new edition of Burns's correspondence, and the other new manuscript findings of letters similarly help.

“The discovery of the draft, 'Composed on hearing a bird sing', will also help us understand better the creative process behind one of Burns's poems. The Aiken epistle and especially the Maxwell-McLehose exchange bring poignant and important additional detail to the immediate aftermath of Burns's death and its effect on those whom he had loved. It is very exciting that such lost manuscript material continues to emerge in the 21st century.”

The manuscripts were found inside an Extra Illustrated W.Scott Douglas edition of ‘The Works of Robert Burns’, dating from 1877-79, which belonged to Burns’s publisher, William Paterson.  At least some of the manuscripts appear to have been at one time in the possession of Burns’s close friend and physician, Dr William Maxwell. Maxwell was one of a small group of Burns’s close friends who undertook the collection of the poet’s own papers and related manuscripts following his death.

The song was first published in 1800 but this manuscript, with minor textual variations, was previously unknown.

This pencil manuscript of an early draft of ‘Ode to a Woodlark’ was published in 1877-79, but has been lost ever since.

Dated Mossgiel, 18 November, 1786. This short letter was first published in 1834 but lost thereafter.

Dated 2 August, 1791, this letter was previously published in part in 1877-79, but we now have the whole letter with the complete ‘Clarinda’ poem.

Dated 31 October 1796, this letter was written to Burns’s physician just over three months after the poet’s death and was previously unpublished. In this letter Clarinda, having been informed that Burns’s publisher, William Paterson, had possession of some or all of the letters she had sent to Burns, asks for them back. In a tender postscript she also requested details of Burns’s `final scene’ from Maxwell, who had attended the poet in his last hours.

Dated 20 August 1793, the manuscript of this letter from one of Burns’s publishers was lost until now.

This epistle from the subject of Burns’s poem `Epistle to a Young Friend’ was sent to Burns on 2 December 1793, and is thought to have never been published before.