The history, traditions and ethos of the University of Glasgow form a major element of a landmark six part BBC Radio Scotland series to be broadcast each Wednesday afternoon at 1405, beginning on Wednesday 14 September 2011.

In the series presenter Billy Kay examines different aspects of university life in Scotland over the past six centuries. The University of Glasgow features heavily across several of the programmes, and episode five, entitled “Democratic Intellectualism”, is wholly focused on the rise of Glasgow from a medieval ecclesiastical university to a mercantile powerhouse and industrial giant in the 19th century, to being a centre of world learning today. This episode will be transmitted on BBC Radio Scotland on Wednesday October 12 at 1405. 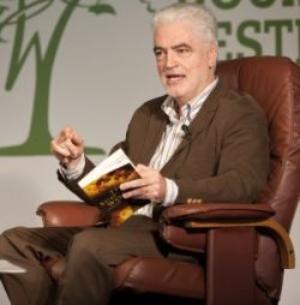 Billy Kay interviewed several members of staff at the University of Glasgow, and was delighted with the end product:
“As the debate over the future of higher education in Scotland intensifies, this series provides a timely reminder of how important the universities have been to our sense of ourselves over six centuries.  The University of Glasgow was always at the centre of the debate and it was thrilling for me to speak to experts and touch artefacts relating to great men like Melville, Buchanan, Hunter and Smith.  One of the stories that touched me though came from a Glasgow graduate who was Professor of Romance Languages at Princeton University for many years, Lionel Gossman.”
“ Lionel came from Glasgow’s Jewish community and spoke with warmth and pride about what his alma mater gave  him, but he also spoke about the people he had come across in America who had studied medicine at Glasgow  at a time when there  were quotas for Jews in American universities.  They still identified profoundly with Glasgow University and what it gave them in their lives.  To me this was the Scottish tradition of democratic intellectualism at work.”

“Another gem I picked up was a poem from 1783 by John Mayne who stressed the centrality of the University in the identity of the city’s burgeoning population. The words speak volumes for the importance of the University of Glasgow to the Scottish Intellect.”

If ye’ve a knacky son or twa ,
To Glasgow College send them a’
Where, for the Gospel or the Law
Or classic Lair,
Ye’ll find few places hereawa’
That can compare
There they may learn, for sma’ propine,
Physician, Lawyer or Divine:
--- the gem that’s buried in the mine
Is polish’d here ,
Till a’ its hidden beauties shine,
And sparkle clear. “

EDITORIAL NOTES
• The Scottish Intellect is broadcast on BBC Radio Scotland each Wednesday afternoon at 14.05, starting on Wednesday September 14 2011. BBC Radio Scotland is available on 810 medium wave, 92-95 FM and also online.
• For more information visit the programme website http://www.bbc.co.uk/programmes/b014ggs2
• The University of Glasgow was the joint top rated University in Scotland in the 2011 National Students Survey, and joint seventh in the UK. www.unistats.com • For more information contact Peter Aitchison in the University of Glasgow Media Relations Office on 0141 330 3535; 07766 111244 or email peter.aitchison@glasgow.ac.uk