Scientists drag light by slowing it to speed of sound

Scientists at the University of Glasgow have, for the first time, been able to drag light by slowing it down to the speed of sound and sending it through a rotating crystal.

Most people may think the speed of light is constant, but this is only the case in a vacuum, such as space, where it travels at 671million mph.

However, when it travels through different substances, such as water or solids, its speed is reduced, with different wavelengths (colours) travelling at different speeds. 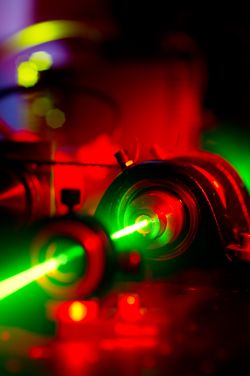 In addition, it has also been observed, but is not widely appreciated, that light can be dragged when it travels through a moving substance, such as glass, air or water – a phenomenon first predicted by Augustin-Jean Fresnel in 1818 and observed a hundred years later.

Prof. Miles Padgett in the Optics Group in the School of Physics & Astronomy, said: “The speed of light is a constant only in vacuum . When light travels through glass, movement of the glass drags the light with it too.

“Spinning a window as fast as you could is predicted to rotate the image of the world behind it ever so slightly. This rotation would be about a millionth of a degree and imperceptible to the human eye.”

In research detailed in the latest edition of the journal Science, researchers Dr Sonja Franke-Arnold, Dr Graham Gibson and Prof Padgett, in collaboration with their colleague Professor Robert Boyd at the Universities of Ottowa and Rochester, took a different approach and set up an experiment: shining a primitive image made up of the elliptical profile of a green laser through a ruby rod spinning on its axis at up to 3,000 rpm.

Once the light enters the ruby, its speed is slowed down to around the speed of sound (approximately  741mph) and the spinning motion of the rod drags the light with it, resulting in the image being rotated by almost five degrees: large enough to see with the naked eye.

Dr Franke-Arnold, who came up with the idea of using slow light in ruby to observe the photon drag, said: “We mainly wanted to demonstrate a fundamental optical principle, but this work has possible applications too.

“Images are information and the ability to store their intensity and phase is an important step to the optical storage and processing of quantum information, potentially achieving what no classical computer can ever match.

“The option to rotate an image by a set arbitrary angle presents a new way to code information, a possibility not accessed by any image coding protocol so far.”

A copy of the research paper 'Rotary photon drag enhanced by a Slow-Light Medium' can be found here.