After 45 years painstaking scholarship by the English Language department of the University of Glasgow, the world’s first historical thesaurus is to be published this week (22 October).

The brainchild of Professor Michael Samuels in 1964, the Historical Thesaurus of the Oxford English Dictionary is the culmination of thousands of hours work by hundreds of research assistants, postgraduate students, university staff and volunteers.

The grand ambition was to map almost every word in the 20-volume Oxford English Dictionary on to a vast classification structure where words with similar meaning are grouped together and listed in chronological order from the oldest (c700 A.D.) to the most recent.

The awe-inspiring completed work contains nearly 800,000 meanings, organised into more than 236,000 categories and subcategories collected together in 4,500 pages in two volumes. Now, for the first time ever, we can look at the English language as a whole directly in terms of meaning and gain insights into its use. The Historical Thesaurus of the Oxford English Dictionary is a unique tool for exploring more than a millennium of language change and cultural nuance. 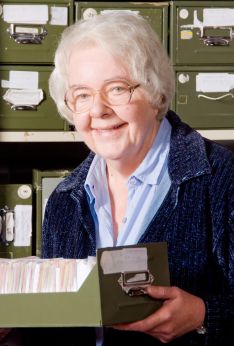 Professor Christian Kay, one of four editors on the project, said: “The difference between our thesaurus and Roget's Thesaurus is that we go right back to the beginnings of English. So that, in addition to getting the words arranged by their meanings, we provide the dates during which they were current in English. We include obsolete words which are no longer in use or are only found in very special contexts. Words have different survival rates, so there are maybe 7,000 words which have been in English since the very early days and there are other words that maybe only lasted for a few years. For the first time ever, The Historical Thesaurus of the Oxford English Dictionary puts these in context.”

The dedication, scholarship and hard work has paid off with widespread acclaim for the publication. David Crystal, Professor of linguistics at the University of Wales said: “The Oxford English Dictionary gave us individual trees, but never a sight of the whole forest or helpful pathways through it. The Historical Thesaurus of the Oxford English Dictionary does precisely that.”

Randolph Quirk, Emeritus Quain Professor of English Language and Literature, University College London said: “This book is a magnificent achievement of quite extraordinary value. It is perhaps the single most significant tool ever devised for investigating semantic, social and intellectual history.”

Broadcaster and novelist, Melvyn Bragg said: “The Historical Thesaurus of the Oxford English Dictionary will be outstanding and indispensable and so much fun! Who would have thought that ‘Smacker’ (one who gives loud kisses) came in 1611 - at the same time as the first King James Bible.”