In a world-first, scientists at the University of Glasgow have grown micro-tube structures from crystals of inorganic compounds.

The discovery – published in Nature Chemistry’s April edition – has major implications for the micro-fluidics industry with applications in medical sensing – through so called lab-on-a-chip devices – being one of the major prospects.

The tiny tubes were observed sprouting from crystals of Keggin-net, a type of polyoxometalate which comprises large clusters of metal and oxygen atoms, seconds after they were immersed in water containing positively-charged organic molecules – or cations.

Scientists were able to control the rate of tube growth, by varying the concentration of the cation solution, and the direction of growth by altering the polarity of electrodes placed around the crystals. By injecting a fluorescent dye into the tubes they demonstrated the tubes were also water tight.

Professor Leroy Cronin, who leads the research group that made the discovery, in the Department of Chemistry, University of Glasgow, said: “The phenomenon we have discovered is quite amazing. It presents the possibility of growing micro-fluidic channels in any pattern you want, controlling the rate of growth and direction like an Etch-a-Sketch, and then flowing liquids through the tubes. It might also provide some intriguing insights into the emergence of life.” 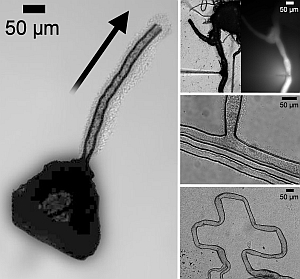 When severed, the tubes, which can grow at rates of between one micron to more than 100 microns per second, continued to grow from the point where they were cut. They can also negotiate obstacles and merge with each other. Tube diameters were as small as 20 microns (for comparison, a human hair is 100 microns wide). Tubes many millimetres long were observed before growth ceased when the crystal was nothing but an empty shell.

The research team will publish a recipe for growing the microtubes so that others can experiment with different materials. Different polyoxometalates will vary the chemical properties of the tubes enabling them to react with different cation solutions presenting various possibilities for applications in medical sensing, for example.

Prof Cronin said: “It’s an intriguing process and one which might have many exciting applications in making micro-fluidic devices. Because it appears that many types of polyoxometalates can be used to grow tubes, they could be designed to have a variety of functions and applications. We intend to research further the mechanism of tube growth and formation and demonstrate even higher levels of control.”

A paper on the discovery – ‘Spontaneous assembly and real-time growth of micro-metre-scale tubular structures from polyoxometalate-based inorganic solids’ – will be published in April in Nature Chemistry and online at www.nature.com/chemistry

Click here for a video of the tubes forming.