Life expectancy: the long and the short of it

A new study has revealed that life expectancy can be predicted from the length of specialised bits of DNA at the ends of chromosomes.

Researchers studying Alpine swifts have been able to predict the life span of the birds in the wild by measuring their telomeres – specialised bits of DNA that mark the ends of the chromosome in cells of all higher animals including humans and protect the DNA from loss of important genetic information during cell life.

The length of the telomeres is known to play an important role in the ageing of cells grown in the laboratory. Telomere shortening occurs every time a cell divides, which results in the chromosome losing some of its length and this ‘hit’ is taken by the telomeres. Once their telomeres become very short, cells stop dividing and either remain inactive or die. But scientists have known little about what this means for the performance of the whole body under natural conditions. The answer, it seems, is ‘a lot’.

Professor Pat Monaghan, Department of the Ecology & Evolutionary Biology, said: “Studies in a wide range of species, including humans, show that telomeres tend to get shorter as the tissues get older. Most work on telomeres however, has been done on cells grown in the laboratory, and it has been unclear how the rate of change in telomere length affects lifespan.”

Working with wild birds, researchers at the University of Glasgow and the University of Lausanne, Switzerland, have now shown that changes in telomere lengths in blood cells predict the future life expectancy of the birds.

Pierre Bize from the University of Lausanne collected blood samples from the Alpine swifts breeding in clock towers in Swiss towns every year. 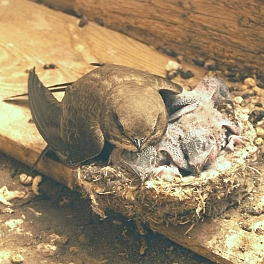 Dr Bize said: “Since the birds can live for over 20 years and come back every year to the same colony to breed until they die, I have been able to get samples from the same birds at different ages and to record their survival.”

Dr Bize brought his samples to Glasgow for analysis, where a research group specialises in looking at animal telomeres. By comparing average telomere lengths in red blood cells taken from the same swifts at different points in their lives, the researchers then worked out the average telomere length and loss rate over a five year period, and matched this with information on the birds’ survival.

They found that a combination of the initial telomere length and the rate of shortening, rather than the bird’s actual age, predicted whether or not the bird would survive to the next year.

Prof Monaghan said: “It’s previously been shown that telomeres are an indicator of the general health of cells, but this is the first time that the rate of shortening has been found to predict survival chances over long periods. It was very striking that this was a much better predictor than the birds’ actual ages, even though birds up to 19-years-old were present in the sample.

“As yet we don’t know why individuals differ in the rate at which their telomeres get shorter, but it may be linked to factors in the environment since humans that are under stress are known to have shorter telomeres.

“Whether the length of telomeres and the rate at which they are shortening also predicts future life expectancy in other species – including humans – remains to be seen. But would you want to know?”

The scientific study is published in the prestigious journal Proceedings of the Royal Society B and was supported by the Natural Environment Research Council.