Glasgow scientists are aiming to harness a substance secreted by parasitic tropical worms to help them find a more effective treatment for inflammatory types of arthritis.

A team of scientists at the Universities of Glasgow and Strathclyde plan to take advantage of the anti-inflammatory properties of a large molecule secreted by parasitic filarial nematode worm, called ES-62. 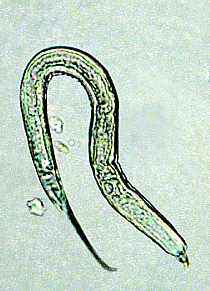 ES-62 circulates in the bloodstream of tens of millions of infected people in the Tropics, to prevent the massive inflammatory responses that the worms are otherwise capable of producing in conditions such as elephantiasis. ES-62 has no known adverse effect on general health, nor does it inhibit the ability of infected people to fight other infections.

The team, led by Professor Margaret Harnett, at the University of Glasgow’s Division of Immunology, Infection and Inflammation, aim to produce a  synthetic derivative of ES-62 in order to ultimately develop novel anti-inflammatory drugs that will effectively combat auto-immune, inflammatory conditions such as rheumatoid arthritis.

The research is being funded by a three-year grant of £213,700 from the Arthritis Research Campaign.

“In our study, we will exploit a mechanism optimised by human/parasite interactions over millennia to develop anti-inflammatory drugs,” said Professor Harnett.

“This is because we will be focusing on mechanisms of combating hyper-inflammation that have developed naturally and with apparent acceptance by humans during their co-evolution with parasites,” said Professor William Harnett from the University of Strathclyde.

It is becoming increasingly clear within the scientific community that there is an inverse relationship between worm infections and conditions such as rheumatoid arthritis, inflammatory bowel disease, type-1 diabetes and multiple sclerosis, with auto-immune diseases being rare in countries endemic for parasitic worms.

“ES-62 appears to act like a ‘thermostat’ to effectively turn down disease-causing inflammation which leaving essential defence mechanisms intact to fight infection and cancer,” said another member of the research team, Professor Experimental Medicine at the University of Glasgow, Iain McInnes. “This property also makes ES-62 a unique tool for scientists to identifying how such disease-causing inflammation occurs.”

The team hopes that ultimately, it will be possible to correct a whole range of autoimmune inflammatory diseases by fine-tuning specific types of inflammation, by treating them with “cocktails” of several ES-62 derived drugs.