Glasgow’s contribution to the Big Bang

The University of Glasgow has a proud heritage in particle physics having been the home of the first electron synchrotron in Europe in the fifties and this tradition continues up to the present day and the start of a new era.

Glasgow engineers and scientists, along with their colleagues from around the globe, are eagerly awaiting the first data produced when the world's biggest scientific experiment, the Large Hadron Collider (LHC) is switched on today (10 September 2008).

The LHC is the most powerful particle accelerator ever built by man and will seek answers to some of the most fundamental mysteries of our Universe, from anti-matter to dark matter and the existence of extra dimensions. Whether the LHC confirms or denies leading theories, its results will start a new age in our understanding of physics and the entire Universe. 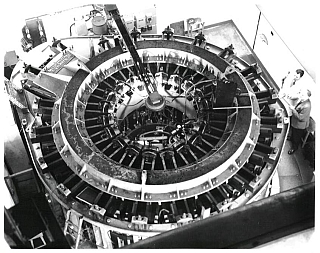 The LHC was conceived 20 years ago and, soon after, the ATLAS general purpose detector was conceived. ATLAS is a particle physics experiment that will explore the fundamental nature of matter and the basic forces that shape our universe. The ATLAS detector will search for new discoveries in the head-on collisions of protons of extraordinarily high energy. ATLAS is one of the largest collaborative efforts ever attempted in the physical sciences. There are 2100 physicists (including 450 students) participating from more than 167 universities and laboratories in 37 countries.

The ATLAS detector is constructed like a set of Russian dolls. University of Glasgow Emeritus Professor David Saxon, who was a leading proponent of the tracking system design, said: “We in Glasgow have been working on the Vertex Detectors using close-in silicon tracking. It’s designed as a mosaic of tiles. Each of these tiles can detect and measure with micron accuracy and 40 million times a second.”

Speaking from an STFC launch event at Westminster, Dr Craig Buttar, ATLAS-Glasgow Group Leader, who has been leading the production of the tiles, said: “There was a lot of intricate work to do for example in bonding around 500 gold wires to each of the silicon tiles and read out the precision detectors. We’ve been testing these for the last couple of years using cosmic rays but this will all change with the advent of the colliding LHC beams prior to Christmas this year. This first data will enable us to measure the basic properties of interactions at the highest-ever energies and also, perhaps, the first top quarks in Europe.”

We continue to participate actively in the kind of detector development activity which has gone on here since the early days of cloud and bubble chambers, scintillation and semiconductor counter developments, nuclear emulsions, streamer and proportional chambers, and, as technology has become more sophisticated, in ever closer co-operation with our colleagues in the Department of Electrical and Electronic Engineering.

Speaking from Holyrood, University of Glasgow Emeritus Professor Kenway Smith is enthusiastic about the future LHC programme: “I'm finally coming to grips with the fact that the long journey to design, build, install and commission ATLAS is just the first step of what will be a longer, but more exciting and surely as rewarding an adventure. I can hardly wait!” 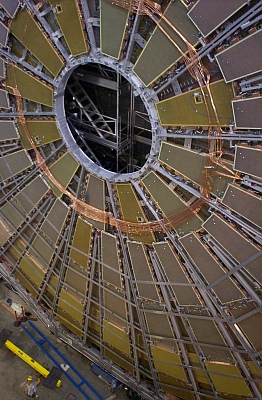 The LHCb experiment aims to answer the vital question of why there is a preponderance of matter over anti-matter in the universe and the RICH and VELO detectors will allow us to identify the particles that are emitted from the proton collisions at the LHC. In preparation for the circulating beam, at 17:30 on Friday 22 August 2008 LHCb reconstructed in its Vertex Locator (VELO) the first particles from the LHC. The LHC synchronisation test collided a beam of protons with a 28 tonne absorber 200m away from LHCb, producing a shower of particles. Some of these particles reached the LHCb experiment, where the tracks were observed by a small team of scientists.

The VELO is a precise particle-tracking detector that surrounds the proton-proton collision point inside the LHCb experiment. At its heart are 84 half-moon shaped silicon sensors, each one connected to its electronics via a delicate system of more than 5000 bond wires. These sensors will be located very close to the colliding LHC beams, where they will play a crucial role in detecting b quarks, to help in understanding tiny but crucial differences in the behaviour of matter and antimatter.

Dr Chris Parkes, UK VELO Project Leader and VELO software co-ordinator, said: “The particles were seen by the team of scientists within seconds, and from the very first collision! This bodes well for the future operation of the experiment to explore the differences in behaviour of matter and anti-matter.”

The group has been involved since 1998 in the design, construction and installation of the Ring Imaging Cherenkov (otherwise known as RICH) detectors for the LHCb experiment, in collaboration with other partners in the UK, CERN and Italy. The Universities of Glasgow and Edinburgh worked together to test all the very sensitive light detectors that were installed in the RICH detectors at CERN. Dr Paul Soler said: “It has been 10 years of hard work that is now starting to pay off as we approach the first data from the LHC. It is an exciting time to be a particle physicist and we look forward to discovering new phenomena from the LHC in the coming years.”

Among the most impressive 'sea-changes' in Glasgow recently have been the Grid-related computing activity led by Professor Tony Doyle, Glasgow Particle Physic Experiments Group Leader. The computing system was designed to meet the huge challenge of handling the massive data flow rate from the LHC. Professor Doyle said: "In order to handle the large amounts of data which come from the LHC, we decided to build a successor to the World Wide Web which we call the Grid. This incorporates sites around the world, including Glasgow, and enables us to meet the analysis challenge."

Speaking from Holyrood, Professor Dave Britton, GridPP Project Leader, said: “The UK, through GridPP, provides 15% of all the computer resources that make up the grid for the LHC and has been a key contributor to developing grid software, security procedures and managing the wider project. Along with supporting the very strong physics community in the UK, GridPP’s computers will also help the other 8,000 scientists in 80 countries around the world who want to analyse the data coming from the four main experiments based around the LHC’s 27km tunnel buried 150m under the French/Swiss border.”

Dr Peter Bussey, ZEUS-Glasgow Group Leader said: “Without prior experiments at HERA and extensive modelling of high-energy collisions, it will be impossible to separate the signatures for new physics from the complicated background of the known Standard model processes.”

One of the main goals of the ATLAS programme is to discover and study the Higgs boson. The Higgs is of critical importance in particle theories providing a basis for all other particle masses. "We’ve been pushing the limits of the Higgs boson mass with the ALEPH and CDF detectors but this important missing piece of the jigsaw puzzle remains undiscovered," said Dr Richard St Denis.

Professor Tony Doyle said: "There are candidates, but at present no clinching evidence. Higgs events are so rare, it’s like looking for 1 person in a thousand world populations or a needle in 20 million haystacks … fortunately we’ve developed sophisticated data analysis techniques and the Grid computing system to help us in future analyses.”

Particle Physics research is conducted at 21 universities and 4 national centres in the UK and is recognised as internationally leading. The challenging nature of the research necessitates paradigm shifts in accelerator, sensor, microelectronics, data acquisition and computing technologies and development of novel analysis techniques in the context of large-scale international collaborative research. The technologies developed through industrial and international collaboration are vital to other disciplines, particularly in the medical and life sciences. Further innovation via Particle Physics research will enable advances to be made in other disciplines, particularly medical treatments, sustainable energy and security.

Innovation continues for the next phase in the planning, with the so-called Super-LHC where the beam intensities are proposed to increase by a factor of ten. The associated next-generation Particle Physics detectors are being developed with very fine granularity and ultrafast readout capable of operating in very high radiation environments. Dr Val O’Shea, leader of Glasgow Detector Developments said: “Such detectors are also required at next generation light-sources and pulsed neutron sources and have wide applicability outside Particle Physics. For example quantum dosimeters can be developed from the silicon pixel detectors under design for the Super-LHC that will improve the accuracy of dose estimates considerably.”

Speaking from the University of Glasgow Open Day where future physicists are hopefully inspired to study Physics & Astronomy, Professor Tony Doyle concluded: “The scale of the open questions in particle physics require us all to push man’s current boundaries of engineering, detector, analysis and computing development. We are proud of our heritage and continue to innovate, whilst recognising that we are standing on the shoulders of giants, as we explore ever more deeply into the fundamental constituents of matter. The invention of the LHC will enable future physicists, including perhaps some of you, to rewrite the physics textbooks.”