Renowned American mathematician and internet pioneer, Professor John Baez will be delivering the prestigious biennial Rankin Lectures 2008* at the University of Glasgow next week.

Professor of Mathematics at the University of California, John Baez is a world leader in quantum gravity using higher-dimensional algebra but is perhaps best known for his web-based column: ‘This week’s finds in Mathematical Physics’. The website – established in the infancy of internet 15 years ago - has since established a global readership for Baez’s simple and accessible explanations of advanced mathematical research papers. 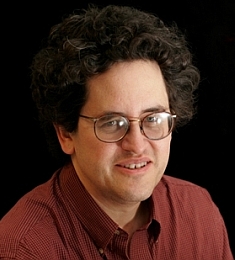 During his visit to Glasgow, Professor Baez will deliver three lectures on ‘My Favourite Numbers: 5, 8 and 24’ respectively at 4pm in Room 515 of the Department of Mathematics at the University on Monday 15, Wednesday 17 and Friday 19 September.

Professor Baez said: "I've noticed over the years that different numbers have their own ‘personalities’.  If you're a mathematician doing a calculation and you get the answer 248, it means something completely different than if you get 247 - because the number 248 shows up in all sorts of amazing places, while 247 is just dull.  So, I thought it would be fun to explain this idea with some examples.”

Professor Peter Kropholler, Head of Mathematics at Glasgow said: "The department is delighted that Prof Baez will be giving the Rankin Lectures this year. Not only is he an internationally renowned mathematician, he is also a highly gifted communicator with a special gift of being able to explain complex ideas in simple, often highly visual, ways"

The opening talk, on the number 5, will be accessible to mathematically-interested schoolchildren, students and non-mathematicians alike and is free and open to the public.

The number 8 plays a special role in mathematics due to an 8-dimensional number system called ‘octonions’. And the number 24 is central to both mathematics and physics thanks to a series of ‘coincidences’ that is just beginning to be understood.

*The Rankin Lectures, supported by the Glasgow Mathematical Journal Trust, celebrate the achievements and influence of eminent Scottish mathematician Professor Robert Rankin who spent most of his career at the University of Glasgow. He died in 2001.

My Favourite Numbers: 5, 8, 24
Room 515, Department of Mathematics, University of Glasgow.

All three lectures begin at 4pm.

Further information on the lectures: http://www.maths.gla.ac.uk/~tl/rankin