Professor Michael Schmidt has written a series of pamphlets to be distributed with the Independent newspaper.

The Great Poets series will look at the world and work of 14 of the best loved poets in the English language. The subject of the first pamphlet, free with the Independent this Saturday (8 March), is fourteenth century poet Geoffrey Chaucer.

In the introduction, Professor of Poetry, Michael Schmidt says: “Chaucer is the point of departure, the first major English poet and in some ways still the greatest poet of England.” 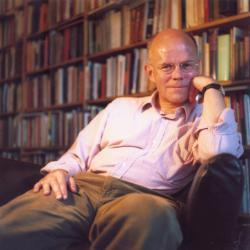 Among the other poets Professor Schmidt will feature during the poetry fortnight are Donne, Milton, Blake, Burns, Emily Dickinson and Gerard Manley Hopkins.

Currently convenor of the University of Glasgow’s Creative Writing programme, Professor Schmidt is also founder and editorial director of Carcanet Press. A well-known poet, publisher and critic, he is author of Lives of the Poets (1998), a comprehensive overview of six centuries of British poetry, and The Story of Poetry: From Caedmon to Caxton (2001) which combines history, criticism and anthology. Professor Schmidt was awarded an OBE in 2006 for services to poetry.