Artists from all over Scotland contributed paintings to a major art auction that raised more than £14,500 for charity.

The auction, which took place on 25 October, included paintings from local amateur artists as well as those with an international reputation, such as, Mairi Aitken, Louise Annand, Mary Batchelor, James Robertson, Philip Reeves and Alma Wolfson. 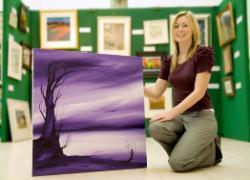 With reserve prices ranging from £50 to £1,500, approximately 90 paintings were sold raising more than £14,500. The funds raised  will be split between cancer research at the University of Glasgow and CHAS (the Children’s Hospice Association Scotland).

For more information on the event, or for a preview of some of the artworks, visit http://www.gla.ac.uk/artevent